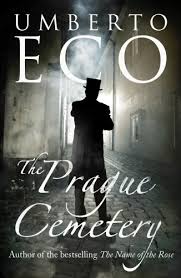 The Plot: Simone Simonini is a forger and spy in 1890s Paris. He is our protagonist -- or shall I say one of our protagonists, for he seems to share an apartment with one Abbe Dalla Piccola, although the two men have never met. Deducing that they are probably a single individual with two personalities, they communicate with each other via a shared diary, and piece together the events of their life. Simonini is a terrible person, a sociopath who spreads mayhem wherever he goes -- which in this case includes many of the key events in 19th century French and Italian history. (In reference to Simonini's ability to influence so many disparate events, the New York Times review describes him as 'a Forrest Gump of evil'.)

Reactions: I've now read every one of Eco's novels except for The Mysterious Flame of Queen Leona. He is very good at making me feel like a simpleton who is not quite educated enough to appreciate him fully. I felt that way when I read The Island of the Day Before, and I feel that way again with The Prague Cemetery.

The more familiar you are with 19th century Europe, particularly major events in Italy and France in the latter half of the century, the easier a time you'll have with this book. As for me, I know who Garibaldi is, I'm vaguely familiar with the Paris Commune, and I can give you enough information on the Dreyfus Affair to fill two, maybe three sentences, but don't ask me for details on any of these. Eco presumes his audience is up to speed on its history, and I'm sure as a result there are plenty of in-jokes and ironic asides that flew over my head.

All that said, the novel held my interest, partially because of a perverse fascination I had with the character of Simonini. Not since I read Akhil Sharma's An Obedient Father several years ago have I encountered such a repulsive main protagonist in a novel. Readers who cannot stand such a disagreeable character are filtered out early on, as the book opens with Simonini explaining, in quite lurid detail, exactly what he thinks of Jews. This is slightly mitigated by the fact that Simonini goes on to express equally hate-filled feelings for the Italians, the Germans, the French, and the hierarchy of the Roman Catholic Church. But it is Simonini's anti-Semitism that remains at the heart of the novel, and drives the plot towards its final conclusion. And Simonini's vileness goes far deeper than simple bigotry. He has a knack for stabbing his comrades in the back, often in ways that cause the deaths of many innocent people.

Umberto Eco is no anti-Semite. But he's fascinated by the history of human thought, and he loves his conspiracy theories, albeit as objects to play with rather than as things to believe. The book often seems like a spiritual prequel to Foucault's Pendulum, as the sprawling universe of 19th-century nuttery concerning the nefarious doings of the Jews and the Freemasons and the Catholics all turn out to be traceable back to Simonini's damaged mind and his remarkable knack for forgery. Simonini is the only fictional character in the novel. Apart from possibly some background extras of trifling importance, every other person is real, and the book takes us from one historical event to another, showing us the events as they looked from Simonini's quirky perspective.

As for the conceit of having the narrative alternate between Simonini and Dalla Piccola's viewpoints, the two of them almost certainly two halves of the same personality (but we don't find out for sure until nearly the end), it was quite unnecessary as far as the main plot was concerned. But it's clearly a game Eco is playing with us, another layer of complexity on top of an already complex novel, and I'm happy to have him lead me through the labyrinth.

Despite the nagging feeling that I wasn't getting quite as much out of the novel as Eco intended me to, I enjoyed what I read. I just feel I ought to go do my homework and bone up on history, and come back in a few years to read the book again and see if I can glean more from it.
Posted by Brendan at 9:47 AM