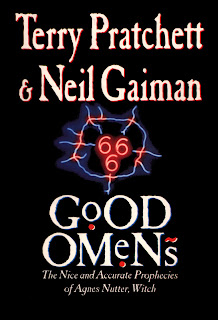 The Plot: Six thousand years after the world is created, it's time for it all to end. The Antichrist assumes human form and the armies of heaven and hell line up to do battle -- although the angel Aziraphale and demon Crowley, longtime frenemies who battle each other largely through witty banter -- are rather wistful and sad to see Earth go. As it happens, Armageddon is in trouble from the start, as babies are mistakenly switched and as a result the Antichrist receives the wrong upbringing...

My Reactions: This book is very well-known in the right circles, written by two of the most popular (maybe the two most popular) names in modern English lighthearted tales of the supernatural, back before either was nearly as famous as they are now. It didn't change my life. It didn't hold me in rapt attention.  But it was a pleasant read, and I snickered and giggled a lot, and on the whole it was not badly done.

Perhaps I would be more gung-ho about it if the writing style hadn't already been familiar to me from various works by Douglas Adams, Christopher Moore, and Pratchett working solo. If any of these names appeal to you, you'll probably enjoy Good Omens.

I want to say something about this story's universe. At first glance, the events of this book appear to hinge on random chance. It's thanks to miscommunication among Devil-worshipping nuns -- in other words, ordinary human error -- that the Antichrist is given to the wrong family. Everything that happens subsequently, up to and including the way the Apocalypse unfolds, stems from that mistake. So it would seem this is a universe where Chaos reigns.

But this was all foreseen by the witch Agnes Nutt way back in the 1600s. It was always going to happen this way. The cosmos' vast orders of angels and demons sincerely believed the world was going to end, but they were misinformed because they couldn't see the big picture. This is, underneath it all, a deterministic universe, and primal Chaos (or the illusion thereof) is only a tool used by the hand of unfolding Fate to move people and things to the places on the cosmic chessboard where they were always going to be.

Aziraphale and Crowley make such a big deal over humans and their supposed 'free will.' But I see no free will here.
Posted by Brendan at 12:48 PM