The Bookseller of Kabul 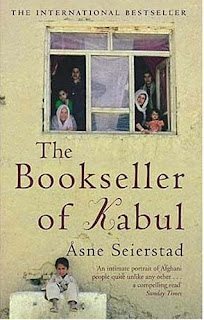 In November 2001, journalist Asne Seierstad arrived in Kabul, and soon made the acquaintance of a bookseller she called Sultan Khan. Over the next few months, she lived with Khan's family and got to know them closely. Upon her return to her native Norway, she wrote The Bookseller of Kabul, a look at the lives of middle-class Afghanis in the months after the collapse of Taliban rule.

The picture she paints is of a socially conservative land, one where the family, not the individual, is the basic unit, and young people's decisions are made for them by the family. Any notion among Westerners that the fall of the Taliban resulted in the liberation of Afghan women is erroneous. In the society Seierstad describes, young women's lives are not their own; they are not free to make their own choices, and who they are going to marry and whether they are allowed to work outside the home are dictated by their elders.

The main difference that came with the fall of the Taliban is that now women can play music as they do their sixteen hours of daily chores without the fear they will be taken to jail. That's assuming their family says it's OK, of course.

In her book, Seierstad delves into the heads of several members of Khan's family. Two of the most prominent are Khan's son Mansur and his much younger sister, Leila.

Mansur is torn between hating his father and wanting to earn his approval. Mansur is inefficient and lackadaisical at running the family bookstore in his father's absence, but he forces himself to become utterly cold-hearted when a former employee pilfers postcards to sell and Sultan Khan insists he be punished severely. Despite the fact that the employee's family is clearly in extremely dire financial straits, and literally on their knees begging for leniency, Mansur acts as his father's representative and brings the full weight of the law to bear on the thief, who ultimately ends up spending several years living under terrible conditions in prison.

Leila, is a very different character. As the youngest of I-don't-even-remember-how-many children, Leila is the perpetual workhorse of the family, but she would dearly love to achieve a bit of independence. She wants to work as an English teacher, but there's an enormous amount of bureaucracy that she has to navigate before she can get herself hired. This is nearly impossible, with her family obligations.

Now, this book is a work of narrative nonfiction. I approach this kind of writing by treating it as realistic fiction. When I read narrative nonfiction, at the outset I assume at the very least that the author has performed acts of artistry such as rearranging events for dramatic effect, or consolidating two or more people into one for clarity. If I think of these characters as people who could very easily have been real, but who aren't necessarily based on any specific people, then I can keep myself from feeling cheated when it turns out the author took liberties with reality.

That is all very well and good, but when characters in a work of narrative nonfiction can be associated with specific people in real life, you get problems. 'Sultan Khan' is an invented name, but the character was drawn in enough detail that the specific real person he was based on could easily be identified, and boy oh boy was he unhappy. He took the author to court to sue her for defamation and an assault on his character. I have some sympathy. All my high-minded talk about how narrative nonfiction should be read doesn't mean much when there's this guy in a book that everyone knows is based on you.

He is on much firmer ground when he says, 'Is it nothing to depict me as a domestic tyrant when I have preserved my family through a quarter century of war only through sacrifice, sweat, and tears?' He's right. Seierstad really does depict him as a domestic tyrant, and a really nasty one at that. The question is whether that depiction is accurate. I have no way of knowing.

That's why this is best read as a work of fiction. Any resemblance to real persons, living or dead, is purely coincidental.
Posted by Brendan at 11:09 AM