Fiction I Read in March 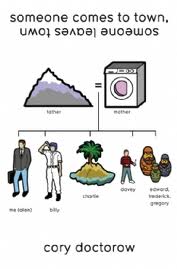 Someone Comes to Town, Someone Leaves Town


by Cory Doctorow
Published in 2005
Published by Tor

This is the third Cory Doctorow novel I've read (after Down and Out in the Magic Kingdom and Little Brother), and somehow it seems both the most Cory Doctorowiest and the least mainstream of the three. It takes place in Doctorow's native Ontario, delves deep into topics that Doctorow is passionate about, and contains weirdness of a sort that many readers will find odd and perplexing.

Alan is the name our protagonist is most commonly known by. He's an eccentric sort of person who arrives in a new neighborhood in Toronto and befriends the local oddballs. He's owned a variety of small businesses and sees himself as a tinkerer and craftsman. When he meets local oddball Kurt, who plans to blanket Toronto in free wifi (bear in mind this novel was written in the pre-smartphone era), the two of them join forces.

At one point Alan describes his family in this way:

Alan's father was a mountain, and his mother was a washing machine -- he kept a roof over their heads and she kept their clothes clean. His brothers were: a dead man, a trio of nesting dolls, a fortune-teller, and an island. He only had two or three family portraits, but he treasured them, even if outsiders who saw them often mistook them for landscapes. There was one where his family stood on his father's slopes, Mom out in the open for a rare exception, a long tail of extension cords snaking away from her to the cave and the diesel generator's three-prong outlet. He hung it over the mantel, using two hooks and a level to make sure that it came out perfectly even.

He has no belly button.

His neighbor Mimi is a lady with wings.

Someone Comes to Town, Someone Leaves Town is a novel of consistent, very well-done surrealism, greatly informed by the mood of old folktales while at the same time not only putting them in a modern setting, but also making making the folktales themselves almost modern. 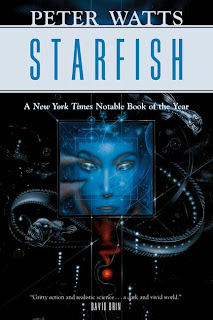 
by Peter Watts
Published in 1999
Published by Tor Books

Deep down, at the bottom of the Pacific Ocean, hydrothermal vents exist where tectonic plates are moving apart. Amid the bizarre sea creatures of the deep, power stations have been built that now, in the mid-to-late 21st century, supply most of the planet with electricity.

The people who work down here are surgically modified to exist in the water outside with a minimum of protective equipment; most notably, they have a lung removed and replaced by machinery to filter oxygen from water. But what are more important are their psychological profiles. Research has concluded that happy, chipper people are dangerously unfit for life in the deep. Rather, the focus has been on training the psychologically damaged. The abused. Victims of child molestation. Abusers. Pedophiles. These are the sorts of people who maintain the equipment down there. They find, in the deep, a calm that had always evaded them up on dry land.

This is not happy, optimistic science fiction. This is horror. There are honest-to-God sea monsters down there. Not to mention the psychological tension and continual sense of unease that pervades the book. You don't read Peter Watts for a happy fun time.

I like Peter Watts in controlled doses. In the second half of Starfish, an overarching plot of truly epic scope begins to coalesce. Starfish is the first volume in what is known as the Rifters trilogy, which I cheerfully await making my way through over the next few weeks.


The Girl Who Played Go 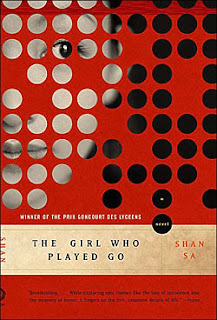 by Shan Sa
translated by Adriana Hunter
Published in 2001

Manchuria, 1937. One of our protagonists is a teenage Chinese girl who plays Go in her village square. The other is a Japanese officer, sent to Manchuria to hunt down anti-Japanese elements disguised as local peasantry.

(Historical Context Note. In 1937 Manchuria was nominally an independent country and ally of Japan. In reality Manchuria had been broken away from China by Japanese effort, and its government was basically a puppet of Tokyo. At the time of the events in the novel, the outbreak of full-scale war between Japan and China is just weeks away.)

Our female protagonist is anxious about her own future. Her best friend appears doomed to be married to a man from her rustic hometown that her father found for her. Her sister is married to a local bigshot who is blatantly cheating on her. Our protagonist becomes involved with two local anti-Japanese revolutionaries. As might be expected, she does not exactly find true love with either.

Our male protagonist's romantic exploits include enjoying the company of prostitutes, though he does longingly look back on a certain geisha back in Japan. His letters back home reveal the nationalistic Japanese mindset, and one thing I can say to Shan Sa's credit is that while the cruelty of the Japanese forces is spelled out in some detail, the book never feels like a piece of anti-Japanese propaganda.

By the time our two protagonists finally meet, the novel is at its halfway point. Events happen. There is fighting. In the final pages there is a coincidence so improbable that you know you're reading a work of fiction. Even so, you saw it coming. And that's OK. You know you're reading a novel in which everything happens for a purpose, generally to make things horrible for the main characters to see how they react.
Posted by Brendan at 10:56 AM