Fiction I Read in February 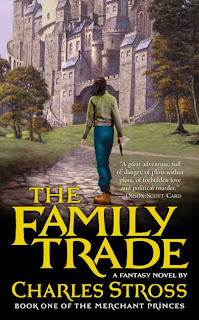 Famed book cover art model Charles Stross is also a science fiction writer of some note. His book The Family Trade is the first installment in his 'Merchant Princes' series. Actually, to be precise, it's more like half of the first installment -- don't buy this book expecting anything other than a cliffhanger and a 'TO BE CONTINUED'.

I'm impressed by what Stross has done here. The Family Trade starts off with a plot right out of Hackneyed Fantasy For Dummies. Our heroine, IT trade journalist Miriam Beckstein, is having a horrible day. She gets fired for exposing a money laundering scheme that, as it turns out, her boss was involved in. Everything's going to hell. Then she finds a magic locket that her dead mother owned. Seriously.

And then the whole thing turns out to be a science fiction story about development economics.

Imagine a parallel-universe Earth with a severely-skewed history, a 21st Century in which North America is lightly populated with poor European peasants. In the grand castles that dot the landscape live the Clan, a group of wealthy families with the ability to jump between their world and ours. In their world, they are the aristocratic elite. On our side, they are a Mafia-like crime family.

In our world, they make their money through drug smuggling. In their world, they live in tacky luxury and watch 'Dallas' reruns while the peasantry lives lives not appreciably different from medieval Europe.

Our protagonist Miriam learns, upon finding the locket that allows her to travel between Earths, that her birth parents were scions of these families. When they learn of her existence, her blood relatives expect her to take her rightful place in their crime syndicate. This is an offer she cannot refuse: birthright is everything in this culture. Miriam's parents were assassinated in an inter-clan feud, and now that her existence is widely known, she would be in grave danger if she gave up the family's protection.

She can't run from the parallel world her family lords over, but she can try to change it. The merchant princes' understanding of economics does not extend beyond the notion 'we like gold', a fact that frustrates Earl Roland, Harvard-educated lord whose attempts to instigate reform have led to his being sidelined within his own family. Together, Miriam and Roland vow to apply development economics to the unfortunate peasantry, but to do so they must master the labyrinthine medieval politics of the Clan.

...and that's as far as we get in this first installment. 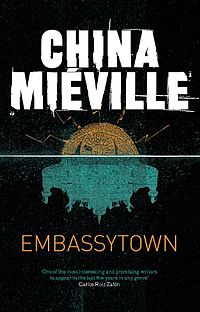 Embassytown
by China Mieville
Published in 2011
Published by Pan MacMillan

After a decade of dancing around the edges of the genre of science fiction, winning himself numerous fans and a Hugo Award in the process, China Mieville finally jumps all the way into the genre with Embassytown, a novel with honest-to-god aliens and spaceships and everything.

It's been a month since I finished this book and I find the characters are receding into the mists. It's not that the book suffers from poor characterization. It doesn't. Rather, China Mieville, who has always been an author of grandly detailed worldbuilding (each of his novels that I've read is centered around a lovingly described, richly detailed fictional city), has this time created a universe that thoroughly overshadows any person who lives within it. There are characters in this book, and they do things which are interesting, but I can't help but feel why should I talk about them when I can talk about the setting?

The Ariekei are the native inhabitants of the planet Arieka. Although they themselves never invented space travel, there is a sizable community of aliens, mostly humans, living within the planet's largest city in an area called Embassytown. Primarily a trading post, base of the interstellar trade in the living machines that the Ariekei breed, Embassytown has been home to generations of humans, the race who make up the bulk of the alien community on Arieka.

The Ariekei are not so terribly important in the galactic scheme of things, but they are seen as a curiosity among linguists due to their Language. They never truly learned to think symbolically. They never developed a written language; they don't even understand pointing at things. Their Language is not capable of metaphors, but it does have similes, and any person who finds it difficult to remember the difference between a simile and a metaphor will never have that problem again after reading this book.

Rather than being symbolic communication, Language is a very direct link between words and thoughts. An Ariekei can not say something it knows to be untrue, any more than a human can believe something she knows to be untrue. Ariekei invite humans to Festivals of Lies so they can watch them tell obvious falsehoods (for example, about a red cloth: 'It is blue'). They find it great, mind-bending fun.

A note about these humans. Human linguists can program computers to pronounce Language perfectly, but to the Ariekei, it's just meaningless babble. As a consequence of Language being a direct auditory extension of thought, Ariekei can only understand Language when it is spoken by a being with conscious will. The problem here is that the Ariekei have two mouths and they speak with both simultaneously.

As a result, all communication between humans and Ariekei go through a small number of Ambassadors, pairs of human clones whose minds have been linked from infancy so that they may act and think as one person. Embassytown locals think this is perfectly normal. Offworlders think it is weird and creepy to have a small caste of dual-bodied people hold so much power.

When outsiders try to break into this Ambassador racket, the main plot of Embassytown begins in earnest, as the unanticipated consequences begin to pile up.

Mieville spends the first hundred or so pages carefully laying out this universe: the world of the remote planet Arieka, its weird inhabitants, their society, and their Language. And then he proceeds to solemnly and methodically wreck the planet's society in an escalating crisis that leads the reader to fear the worst for this poor planet, before he finishes off with the closest thing to a happy ending that appears in any of the four Mieville novels I've read.
Posted by Brendan at 11:40 AM