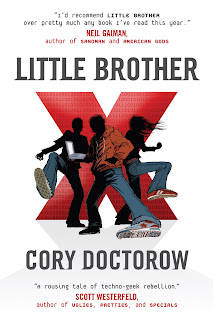 After a terrorist attack in San Francisco leaves thousands of people dead, the U.S. government acting through the Department of Homeland Security goes into overdrive to try and keep the city in proper running order. Local teenagers Marcus, Vanessa, Jolu and Darryl run afoul of the authorities in the immediate aftermath of the attack and are detained and interrogated. Days later, three of them are unceremoniously freed with orders not to tell anyone of what they've been through. Darryl, however, has vanished into the depths of the system.

Marcus and his tech-savvy friends proceed to rebel against the terrifying bureaucracy that has turned their city into a police state and vanished their friend Darryl. They sow a great deal of havoc and cause confusion a-plenty, but the more they do, the more paranoid the authorities get and the more innocent people are harmed by the system...

Little Brother was my first full Cory Doctorow novel, though I've read a couple of his short stories and I've followed his posts on BoingBoing for years. His writing zips right along, and there is never a dull moment (for the record, Little Brother is the first novel I've read to employ the definite article 'teh').

I am curious, though, as to whether some of Rabkins' students were taken aback by the ... immediacy of it. The previous novel in the course was Ursula K. Le Guin's The Left Hand of Darkness (which I elected not to re-read due to time constraints; I read it years ago). Despite taking place on a far-off planet, it has a great deal to say about the real world, and about human society. But it was published in the 1970s, and the planet Gethen is, as I said, far away from us.

Little Brother was published four years ago and takes place five minutes into the future. (Given the conspicuous lack of smartphones in the Little Brother universe, it makes the most sense to imagine it happening in an alternate-reality 2008.) It takes place in the USA, and the bad guys are the United States Department of Homeland Security.

To be honest, when I wrote this blog entry about people who shift uncomfortably in their seat when anything that remotely smells like politics is brought up, I was imagining the reaction of very staid people to Little Brother. But I'm firmly on the novel's side here. Little Brother would not be improved by moving the setting from San Francisco to the Planet Queebog and changing the DHS goons into, I dunno, agents of the Vorlaxian Empire. This story requires immediacy for its impact.

That said, I do have to say that one-sided political rants in fiction do tend to get my eyes rolling, and Little Brother is not entirely immune. I'm talking about the classroom discussions where Marcus and his teachers/classmates yell at each other about American politics (none of the scenes that took place outside the classroom bugged me).

Cory's baddies are too bad, in some ways. There's a kid called Charles, who is an evil sneak, reprehensible in every way, who also holds political views that are at odds with our hero's, making us cheer Marcus when he starts quoting from the Constitution to defeat evil Charles...and Charles felt like a wet straw man. When things get ideological, I wanted Marcus to have at least one decent argument with someone who disagreed with him but at least seemed to have a point of view.


I agree with him. And now, weirdly enough, I have written about two consecutive books on this site that were shortlisted for the Hugo Award but didn't win, and each time I quoted from a review written by the author whose novel did win that year. I don't know how I managed that.
Posted by Brendan at 2:35 PM