A Dance with Dragons

A Dance with Dragons 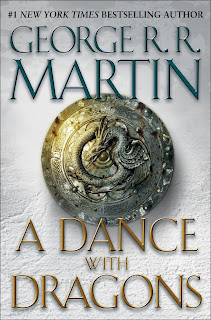 And so we come to the last book of A Song of Ice and Fire that George R. R. Martin has yet completed.

I'll put all comments under SPOILER SPACE, except for one wailed warning for those who might seek to pick up this book:

A Dance with Dragons spends its first two-thirds catching up with the characters who were left out of A Feast for Crows: Tyrion, Jon Snow, Daenerys, and Bran (who makes the most of very little time spent as viewpoint character).

I'll admit that I felt a bit impatient during bits of Tyrion's and Daenerys' early chapters, anxious to get to more plot-heavy parts. That proved to be a mistake -- later on I had to go to A Wiki of Ice and Fire to get all the Meereenese character straight.

It's not that Martin's writing ever gets boring -- it doesn't. I read the first half of A Dance of Dragons on a multi-day trip where my physical activity was curtailed by a leg injury, so I happily sat reading in the passenger seat of our rented car while my traveling companions would go off and take photos. The book served its purpose.

Rather, the problem is that Martin's writing style makes the reader perpetually think something world-changingly awesome is just around the corner, so however engaging page n might be, page (n + 100) is going to be even more engrossing, so the reader can't help reading quickly to get to the good parts, and by 'the reader' I mean me. What makes things worse is that we all remember the second half of A Storm of Swords, when something world-changing really did happen every couple dozen pages. But realistically speaking, we're not likely to return to that fast pace until the final book.

So we're left with a book that builds and builds and adds complexity to an already complex story, and then it stops and we have to wait for book 6. Now I feel some sympathy towards all those fans who pestered Martin to hurry up while he was very slowly writing book 5.

Martin knows how to tease us, particularly in one Bran-viewpoint chapter when he added fuel to the fire of the long-lasting fan debate about Jon Snow's true parentage. Bran's using the Godswood network to see into the past, and he inadvertently spies on a much younger version of his father praying, 'let them grow up close as brothers, with only love between them', presumably referring to Baby Robb and Baby Jon, and the more suspicious among Martin's readers think, so they're 'close as brothers', huh? Doesn't that imply they're not brothers?

Then Bran sees a girl who looks like Arya playing at swords with a younger brother, in a generation where Old Nan is already old, and the obvious conclusion is that the girl is Bran's dead aunt Lyanna and the boy is... somebody. (Benjen?) Readers who enjoy speculating about Jon Snow's parentage perk their ears up whenever the name Lyanna Stark is mentioned, and her mention here is going to drive them crazy.

So, about that Jon Snow. If George R. R. Martin genuinely believed his readers would finish the novel believing that Jon was 100% dead forever and ever, then he drastically misjudged the expectations he'd built up. The question is what's going to happen to Jon now that he is a corpse. Many readers assume Melisandre is going to reanimate him (although I must point out that it's never been shown that Melisandre has the power to reanimate the dead -- everyone just assumes she can, since Thoros of Myr can and he's also a Red Priest). But from the very beginning of A Dance with Dragons, we readers are prepared for the possibility that if Jon's human body dies, he can survive within the direwolf Ghost. I suspect the latter is far more likely, although what would be really creepy (and entirely possible) is for Jon's true spirit to survive in Ghost's body while Melisandre reanimates his human form into a soulless abomination. I think I may bet my money on that.

Many readers moaned, after finishing Book 5, that there is no way Martin can finish this story satisfactorily in just two more books. In contrast, Jo Walton of Tor.com writes in her non-spoiler review:

And there’s evidence that the series is heading towards some kind of actual closure — I was worried that things were opening out and out and nothing was coming back together, but I can see hints of the shape of how it will be coming together. Martin’s been calling this book “Kong” and talking about it as a monkey, but I was afraid it was more of an octopus squirming out of his control — but I see signs of tentacles being nailed firmly down.


Both Walton's non-spoiler and her spoiler review is also worth reading, and not just because of the irony that at the time she wrote them, no one knew that it would be her own novel that would beat out A Dance with Dragons for the Hugo Award.

The main complicating factor that readers moan about is the addition to the political mix of one Aegon Targaryen, rightful heir to the throne of Westeros. Let me repeat that: assuming his ancestry is what he claims, Aegon is now the Targaryen pretender. Not Daenerys. For Daenerys to be the rightful heir, she is going to have to wait for Aegon to die without procreating. Now readers are complaining that the political situation has been complicated needlessly, and there's no way Martin can bring the story to a satisfying conclusion in just two more books now, oh no oh no oh no.

I, however, suspect Aegon's going to die in a spectacular way that will move the plot towards its conclusion. (This is known in Westerosi political circles as 'pulling a Renly'.) Or I could be wrong and Aegon might live, but I'm pretty sure Martin's got a plan for him that will bring about this big fat story's endgame. As much as I like the journey, I'm hoping that sometime over the next decade, an endgame is what we readers get.
Posted by Brendan at 10:29 PM