Let's Not Get Into Politics, Please 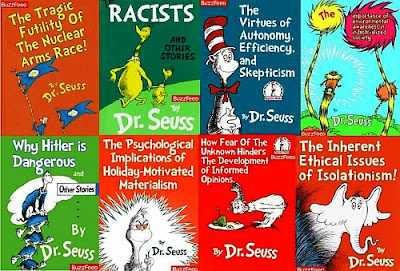 I saw this image on Facebook, and there was one comment that really rankled me. One person posted something like, 'Dr. Seuss just wrote fun stories for little kids. You shouldn't try to politicize them like that.'

Which is just silly, and slightly insulting to Dr. Seuss. Look at those altered titles again: none of them says anything like 'Republicans Are Bad!' or 'Don't vote for Senator Poopyhead!'

That person's comment, if taken literally, would mean 'kid's authors should only write about pure fantasylands utterly disconnected from the issues of the real world, in works that mean nothing outside of themselves.' Which is nonsense.

So why do I feel empathy for people like that?

Because I don't think that's what the commenter really meant. I know what 'politics' means to many people. I know about the culture we're in.

I know that the culture is full of people who think that the way to discuss politics is to park their face two inches in front of their opponents and launch a tirade of nonsense. The loser is the person who flinches from the barrage of spittle. The winner might be vaguely aware that they violated some norm of civil behavior (or common sense), but they were justified, because the topic was important!

I know that, although intelligent, thoughtful people can certainly have strong disagreements on topics that they feel passionate about, there are also people out there who just like arguing, like to take the piss out of out of other people's positions just for the fun of it, sincerely believe that what they're doing is 'having an intellectual debate', and think the reason why some people don't like to play this game is that they 'don't like having their fixed beliefs challenged'.

I know that there's a whole cable-news industry out there that encourages this kind of behavior.

I have sympathy for people who don't want to participate.

So I completely understand people who get a weary look on their faces and retreat out of the conversation when the topic turns even vaguely political. Even when it's a false alarm.

It's a shame. These are people who are being discouraged from talking about serious issues in the real world. And I can't blame them. It's not their fault. Our culture is failing them.
Posted by Brendan at 10:00 AM