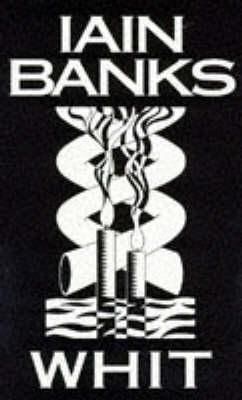 Ever since I realized that I really liked Iain Banks’ writing style and ought to have read all of his books years ago, I’ve been erratically making my way through his body of work. His “Iain M. Banks” novels I’ve been (unnecessarily) trying to read in order, but his no-middle-initial novels I’ve been picking up at random as I find them at used bookstores.

Therefore, I'm drawing on a somewhat arbitrary knowledge of Banks' other work when I say Whit is the first Banks novel I’ve read with an honest-to-goodness female protagonist. (I don’t count Dr. Vosill of Inversions -- Banks never took us inside her head.) As a plucky, resourceful teenage girl, Isis Whit doesn’t exactly break new literary ground, but she’s an agreeable companion.

Whit is also the least violent Banks novel I’ve read. It's not exactly child-friendly, but I kept waiting for something over-the-top bloody and brutal to happen and it never did. It's misleading to say that this is a kinder and friendlier Banks novel given that there's more than one highly disturbing scene, but it's good to learn Banks was actually capable of writing a whole novel without spilling a great deal of fictional blood.

The Whit family business is a cult, the Luskentyrians, founded in the 1940s by Isis’s grandfather, the family patriarch Salvador Whit. The Luskentyrians live fairly isolated lives at their base in rural Scotland, where they abstain from most modern technology to keep their lives uncluttered, but they’re proud of Luskentyrians who go out into the world and set a good example among the “Unsaved” (also known as the “Bland” or the “Obtuse”).

One such Luskentyrian is Isis’s musician cousin Morag. The Luskentyrians have high hopes for her, but now they are worried that she might be leaving the faith. So Isis, granddaughter of the cult founder and next in line to lead the church (due to her February 29 birthday), is sent on a holy mission to London to find Morag and persuade her to remain in the faith…

But little does Isis know that she is being lied to, about many things, from many people. And over the novel’s second half, she puts the pieces together. Whit doesn’t really have the stunning ending plot twist or revelation common to many Iain Banks novels, but Isis does have to deal with a cascade of new information over the book’s latter chapters, and she does a commendably good job of calmly handling it (far better than I would have at her age).

In the end, Whit is pleasant and engaging. I’ve never encountered an Iain No-Middle-Initial Banks novel that failed to be pleasant and engaging. It's got a fair number of signature Banks authorial touches: the set piece where Isis accidentally discovers her cousin Morag's true vocation through a contrived, improbable coincidence is pulled off with narrative flourish, for example, so I shrugged and said "You get away with it this time, Banks!"

Many of the Luskentyrians’ beliefs and practices are presented as rather silly, and the cult itself turns out to be riddled with lies, but there’s still a sympathetic depiction of the sense of community that the Luskentyrians have built, and a sense in the final pages that the community can reform and improve itself if bad behavior is called out and deceptions at the heart of the community are exposed. Sunlight is the best disinfectant, and all that.

This is all well and good, but part of me suspects that if we somehow got a peek at this fictional community 20 years later, we’d find that the new generation of leadership has become just as bad, and plucky teenage Isis has grown into cynical manipulative adult Isis. Maybe I'm too cynical for this story.
x
Posted by Brendan at 12:32 PM