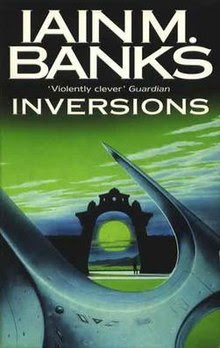 Readers of Inversions may be divided into two groups.

Some readers, in their purity and innocence, will be new to the novels of Iain M. Banks. As far as they can tell, the scope of this book is limited to two fictional countries in a medieval world.

The Kingdom of Haspidius has a king named Quience, and King Quience has a royal court and royal torturers and everything you need for grand medieval drama. Here, we follow young Oelph, assistant to the enigmatic Doctor Vosill. The Doctor has become one of Quience’s closest advisors despite (a) having the enmity of most of the powerful men at court, and (b) being a woman in a very male-dominated society.

Doctor Vosill claims to be from an obscure faraway land several months’ sailing away, but her high self-confidence as an independent woman in this patriarchal society, and her oddly modern medical sensibilities for a doctor in medieval times, suggest that she’s actually even further from home than she lets on.

Meanwhile, the Protectorate of Tassasen does not have a king. It used to, but he was just overthrown and replaced by UrLeyn, an officer who has abolished the monarchy and taken the title of Protector. This new military dictator, when he’s not lounging with concubines in his harem, preoccupies himself with planning war and doing on his young, innocent son. Our viewpoint character in these chapters is UrLeyn’s uber-competent personal bodyguard DeWar.

Now, I imagine the readers who encounter Inversions with no idea of what to expect will still bring some assumptions to the narrative. Generally speaking, works of fiction that take place in worlds with completely invented geographies and politics also feature events that bend or break our rules of consensus reality. Not always, but usually.

But this isn’t a world of magic -- no wizards casting spells, no curses or other supernatural events.

And yet, strange, enigmatic events are prone to happen when Doctor Vosill is around. Particularly to her enemies.

If this is your first Iain M. Banks novel, I wouldn’t blame you for echoing that one guy from Disenchantment who complained, “While I am a fan of such worlds, I just feel some more clearly set out rules for what can and cannot happen would help us…”

Putting myself in the head of a pure and unspoiled reader, I wonder if it’s annoying that Inversions barely sets out rules for what can and cannot happen. And we hear of many small-c cultures, but Inversions never explicitly states that Haspidius and Tassasen and all of their neighboring states are in fact merely minor, backwards entities on the periphery of a powerful capital-C Culture.

Of course, other readers will already know from the start that this novel is set in the remote hinterlands of the Culture universe, where Iain M. Banks had already set four novels and would go on to set several more. Or, if they didn’t already know, readers familiar with Banks will be able to guess in the early chapters.

We get heavy doses of premodern politics and statecraft, and see King Quience and Protector UrLeyn at work, and there’s a sort of conceptual title drop because while Banks seems to be setting up one ruler to be more competent than the other, these expectations are Inverted by the end. The setting of Inversions sustains the book well enough, though it’s not so interesting that I’m filled with regret Banks never returned to it. It resembles late medieval Europe in many respects, though religion has no role as a force in society (people pay lip service to something called Providence, but that’s about it). Within recent memory, a powerful hegemonic power was apparently wiped out by a meteorite, and now the international balance of power is still unbalanced. Haspidius and Tassasen are enemies, but never comes to blows directly.

Similarly, Vosill and DeWar, the two mysterious figures at the heart of their respective stories, never quite cross paths, but they clearly have a shared history with each other. Inversions is a slow-moving, atmospheric novel, the kind where you get halfway in and wonder if perhaps the proper plot has yet to actually begin. I can imagine some readers may be frustrated with the slow pace and the fact that the two plots never really intersect.

However, I personally have a fondness for slowly paced SF novels that take their time to set up their characters and universe -- Katherine Addison’s The Goblin Emperor and Jasper Fforde’s Shades of Grey are two very different examples that come to mind. Banks aficionados might not consider Inversions to be an essential, top-tier work of his, but I enjoyed it.
Posted by Brendan at 1:30 PM