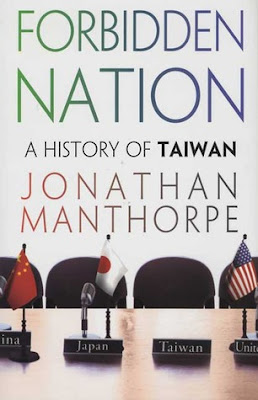 In his 2005 book Forbidden Nation, Canadian journalist Jonathan Manthorpe tells the history of Taiwan. More a book-length work of journalism than an academic work, Forbidden Nation does not strive to be comprehensive. Fortunately, it is well-written and engaging -- but in the end, I wished Manthorpe had paid more attention to certain aspects of Taiwan’s history than he did.

The preface gives us a concise recap of Taiwan’s international position, told from a pro-Taiwan perspective. Apart from the references to President Chen Shui-bian, every sentence in the preface could have been written in 2018 rather than 2005. (The book jacket proclaims in now thirteen-year-old prose: “It is clear that Taiwan has now entered the decade in which its independence will be won or lost.”) The chapter that follows describes the shooting of Chen and Annette Lu the day before the presidential election in March 2004, using the attempted assassination as a frame to introduce other issues in Taiwanese history and society, such as the last years of the KMT dictatorship and the deep roots that organized crime has in Taiwan.

Manthorpe then takes us back in time, to give us a fuller history of Taiwan’s place in the world. This is where we begin to see that Manthorpe is primarily going to show us Taiwan through foreigners’ eyes. Of course, this is unavoidable in the beginning; the native Taiwanese of the first millennium AD did not write things down for future historians. It’s amusing to read the very early attempts by China to subjugate the island (which they tended to get mixed up with Okinawa). The first time China tried to assert military supremacy over Taiwan came in 607 AD, when a military expedition headed by General Chen Ling tried to get the islanders to acknowledge the supremacy of the Emperor of China. The Taiwanese were not interested.

As time passes and written documentation of Taiwan becomes more abundant, Taiwan’s place in the East Asian geopolitical and economic scene comes into much sharper focus. Manthorpe dedicates ample space to the 17th century, starting with the pirate-businessman Li Dan (spelled Li Tan here), who built up a great international business empire in the spaces between Chinese, Japanese, English and Dutch authorities. His heir was Zheng Zhilong (Cheng Chih-lung), who founded the Zheng (Cheng) dynasty, of which Zheng’s son, who became known as Koxinga, is the most famous member. When it comes to descriptions of the age of Koxinga, one could do a lot worse than Manthorpe’s work. The book describes how Koxinga’s forces actually came very close to toppling the Qing entirely when they besieged Nanjing in 1659, a fact that I had been entirely unaware of. According to Manthorpe, the Qing were saved only when they launched a well-timed attack on Koxinga’s forces just after Koxinga and his top aides drank themselves silly celebrating his birthday.

Koxinga was, of course, the one who kicked the Dutch off Taiwan in 1662; his descendants then ruled the island until 1683. Manthorpe provides a detailed and readable account of Koxinga’s conquest of Taiwan, and then the years of his family’s rule. Assuming his description is accurate (I’m no expert), this is not a bad short introduction to Taiwan in the 1600s.

But here we see one of my two big gripes about the book. Manthorpe does a good job bringing history to life through concise biographies of people who are important to Taiwan. Li Dan, the pirate lord from Fujian. The Zhengs, also based in Fujian. Liu Mingchuan, the Qing governor of Taiwan in the late 19th century. And many Westerners who played small parts in Taiwan’s story are also remembered. For instance, there’s Maurice Benyowsky, a Hungarian count who found himself on Taiwan’s east coast in 1771. (Long story.) He gets a full page, and just to be clear, I don't deny he had an interesting life. Even George Psalmanazar, famous for regaling western Europe with his fascinating and entirely made-up tales of life in Taiwan (which he almost certainly never visited), gets a page.

But no Taiwanese individuals prior to the 20th century seem to have any agency at all in Manthorpe’s pages, apart from a few rebel leaders who were all eventually chopped to pieces by the Qing authorities. Of course, one could certainly argue that this reflects reality; Taiwan’s destiny prior to the last decades of the 20th century was indeed primarily in the hands of outside forces. But I would have liked to see more Taiwanese perspectives. It would have been interesting if Manthorpe had chosen some local Taiwanese people who represented different aspects of pre-modern Taiwanese society and fleshed them out to the same extent as the various Chinese and Western figures he described. For the record, the earliest Taiwanese individual who Manthorpe seems to think warrants much discussion is Lin Hsien-tang, political activist in the early 20th century.

Into the modern era, Manthorpe’s focus continues to be rather idiosyncratic -- why does he give us so many more biographical details of Chiang Ching-kuo’s life, as opposed to Chiang Kai-shek or Lee Teng-hui, for instance? He devotes several pages to relations between the PRC and the USA from the 1960s to the 2000s, which is not unreasonable, but it makes it all the more frustrating that he pays comparatively little attention to the White Terror and Taiwan’s democratization. This is my other big source of dissatisfaction with “Forbidden Nation”. I suppose it’s unfair to criticize Manthorpe for where he chooses to focus -- after all, it’s his book, not mine. But the impression one gets from these sections is that the Taiwanese are people that things happen to, rather than people who do things.

Manthorpe concludes by looking at the results and aftermath of the 2004 election, and I feel he’s ending on a high note by putting the focus in the final chapter squarely on Taiwanese politics and its relations with China. For all my gripes, Forbidden Nation is well-written and informative about the areas where it chooses to focus on. I wouldn’t recommend it as a general history of Taiwan for newcomers to the topic, but it’s an interesting read for those who are already knowledgeable about Taiwan -- and know what he’s giving short shrift to.

Forbidden Nation covers similar ground to Denny Roy's Taiwan: A Political History, which is near it on our bookshelf. Overall, Roy’s book goes into much more detail, especially about the ROC period, although it was written before the 2004 elections. The tone of Roy’s book is also much more objective -- while he’s obviously sympathetic to Taiwan as a nation, he doesn’t state his pro-Taiwan views as explicitly as Manthorpe (and I’m not saying this because I disagree with Manthorpe -- in fact, I largely agree with him). Manthorpe’s book has a much livelier prose style and is a quicker, easier read.
Posted by Brendan at 12:16 PM