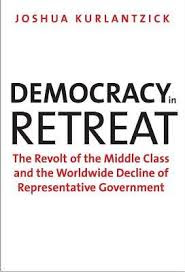 Democracy in Retreat by Joshua Kurlantzick

In the years following the fall of the Soviet Union, democracy appeared triumphant around the world. Yet now, in the second decade of the 21st century, things appear very different. People in countries that transitioned to democracy now feel disenchanted with it, and in many places authoritarianism is creeping back. This 2013 book attempts to explain this situation.

Kurlantzick examines a range of countries, including Thailand, Malawi, Egypt and Taiwan, and he looks critically at what Western democracies have done to encourage democratization, as well as China’s emergence as an alternative model. Thailand seemed to make concrete steps towards democracy and then regressed, while Malawi's economic problems that accompanied democratization have left many people cynical.

Taiwan has, if anything, consolidated and strengthened its democracy in the years since the book was written in 2013. The country does not come off looking so great here, as Kurlantzick focuses on the excesses of the Chen Shui-bian administration that followed the country's democratic transition. But I do appreciate that he treats Taiwan with dignity by dealing with it on its own terms, rather than as an eccentric appendage of China.

Some notes that represent my takeaway from the book: 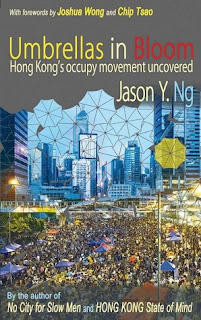 This is an account of Hong Kong’s Umbrella Movement of 2014, told by local activist Jason Y. Ng. It doesn’t pretend to be unbiased, which is fine with me. Ng is very clear and upfront about his pro-democracy opinions and his involvement with the movement -- he was one of the regular denizens of the camp at Admiralty, where he helped students with their schoolwork and was apparently a fixture of the political discussions there. I’m putting this all up front in case anyone wants to say some variation of “Dude, Ng’s biased and he lets his opinions seep into his reporting!” My response would be: Duh, of course he’s got opinions, it’s a personal account.

The Umbrella Movement was the physical manifestation of Hong Kongers' displeasure at how they were being treated by Beijing. After seventeen years of "One Country Two Systems", it had become clear that the Chinese government had absolutely no intention of giving up its heavy-handed interference in Hong Kong's internal governance. For several weeks that autumn, three urban sites in Hong Kong were occupied by large groups of protestors. While they did not succeed in getting Beijing to back down, they got the attention of people across the world. The Umbrella Movement may well turn out to have been the proving ground for a new generation of Hong Kong leaders -- people who the Beijing government would very much like to shut up for good right now.

I like visiting Hong Kong. It feels like more of a busy, bustling city than Taipei, and so it’s is good to visit once in a while just to experience the contrast. It is fun to explore and the food is excellent. Every time we go, we spend some time roaming the ground floor of Chungking Mansions growing inexorably fatter and fatter. But I feel like I’d only have to live in Hong Kong for a short time in order to feel disenchanted with it. Part of it is the fact we’d probably end up paying twice as much rent to live in half as much space. But I’m also afraid I’d get incredibly disheartened with the politics if I followed it on a day-to-day basis.

From a Taiwanese perspective, Hong Kong is a warning of a dystopian possible future. The more Beijing tightens its grip on HK’s political system, the more convinced Taiwan becomes that they don’t want any of that, no sir.

I admit that my background knowledge about Hong Kong is not terribly substantial, so I won’t comment on Ng’s book in a deeper way than this. But I do appreciate the information he provided about how Hong Kong elections work (or at least, how they worked in 2014), and the gap between what locals want from the government and how Beijing is shaping things -- which is rather ironic, as Ng seems to think this is the most boring part of the book!

He also gives rebuttals for the most common arguments that you hear from the pro-Beijing side -- that discontent in HK is caused by Western interference aimed at destabilizing China, that Hong Kongers are merely jealous that they’re not Asia’s premier financial capital anymore, and so on.

Ng also adds some of his own thoughts on protest movements, how they can work, and some of the potential dangers. My own knowledge of the theory and practice of street protests is shamefully lacking, given that if anything they’re growing in importance both in my country of citizenship and my country of residence. I do notice a copy of L. A. Kauffman’s Direct Action sitting on my bookshelf unread. Hm... 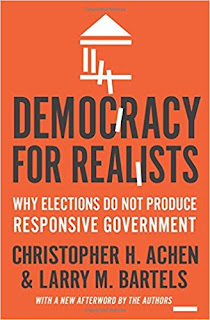 Democracy for Realists: Why Elections Do Not Produce Responsive Government by Christopher H. Achen and Larry M. Bartels

This is a pessimistic title but I’ve got good news: it's mostly stuff you probably already suspected. That’s a relief, perhaps?

Let me make one thing clear immediately. This book is about elections. It is not about a free press, freedom of assembly and association, a thriving civil society, the rule of law rather than the whims of those in power, the freedom to not be oppressed by a tyrannical government, or any of the other things that we associate with democracies rather than authoritarian systems. At least, not directly. You could certainly make a case that free elections are a necessary precondition for some or all of the other good stuff.

In other words, this book is not repeat NOT making the case that democracy is no better than authoritarianism.

Rather, it focuses on demolishing the idea that free elections, by themselves, produce responsible government attuned to what the voters want. Achen and Bartels center their argument around what they call the “Folk Theory of Democracy”: the great masses of people have sufficient good sense to make wise decisions at election time, even if many individual voters are severely lacking in this regard.

The book attacks this idea from several directions. When voters are passing judgement on the performance of the party in power, how can they assign credit or blame accurately? Is even possible for most voters to vote for the party that fairly represents their views, when voters’ choices are dictated from the top down by the parties? And this presupposes that most voters even make voting choices based on coherent already-existing beliefs, when there is quite a bit of evidence that for many (most?) people, their political views are a consequence of their party and group loyalties, not a cause of them.

The authors make a convincing case, and anyone who feels a sense of deep disagreement or revulsion with the previous paragraph should give it a read so that they can respond to it.

How does it mesh with the two other, unrelated books I wrote about above? Well, Kurlantzick’s book does take aim at people who see free elections as the be-all and end-all of democratization, which fits with Achen and Bartels, though coming from a different direction. As for Ng’s memoir of the Umbrella movement, one might think I’d suffer cognitive dissonance by reading the book so close to Democracy for Realists. The events of 2014 were the result of calls for free elections, after all. But the underlying issue was the desire that the future of Hong Kong ought to be in the hands of Hong Kongers, and free elections for Hong Kong would, by the very definition of “free”, not be controlled by Beijing. Nothing in Achen and Bartels’ book undermines that.

I am strongly pro-democracy, and I remain so after reading Achen and Bartels' book. They weren't trying to make people give up hope on democracy. They merely want us to have a realistic view of what elections actually are. Democracy for Realists makes important points about human nature and politics -- points that many of us have probably suspected for a long time, but that here are stated clearly and openly.

Some bits that stick in my mind, weeks after I finished it: