What I Read in December

After a three-week trip back to the United States by way of Shanghai that saw us celebrate Christmas in New York State and the new year in Maine, I'm back in Taiwan and trying to get over a bad cold that I'm finding quite annoying. Quick impressions of the 23rd, 24th, and 25th novels I read in 2012: 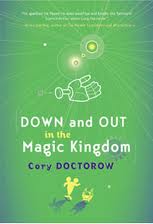 Jules is a centenarian who lives in the futuristic Bitchun Society, world of everlasting youth and plenty. He and his twentysomething girlfriend Lil live and work at Walt Disney World in Florida. Also around is Jules' world-weary buddy Dan, who has put his plan to commit suicide on hold as he works to re-earn his comrades' esteem. (The currency of the Bitchun society is based, not on gold or silver or government fiat, but rather on respect from one's peers.)

The Bitchun Society is a world where death is an inconvenience, as it means you're inactive for several days while they grow you a new body. Jules' rivals make their move while he is out of commission. Infuriated, Jules works to undermine them and also sort out the dangling questions left from his murder, all the while growing more and more fanatical and detached from reality.

Down and Out in the Magic Kingdom was the novel that first made Cory Doctorow's name as a first-rate science fiction writer. It's full of audacious ideas (I'm interested in finding other stories that flesh out Whuffie, the esteem-based currency of the Bitchun Society) and narrative cleverness (it's an industrial espionage thriller set at Disney World! it's a murder mystery where the victim tries to solve his own murder!).

Despite being over a hundred years old, Jules doesn't strike me as a wise old man. He's an eternal twenty-year-old, and frankly acts like an immature jerk a lot of the time. I see a philosophical point buried under the novel's surface. If you've got the body of a young person, and at least the lifespan of a young person ahead of you, is it possible that you'll remain mentally and emotionally young no matter how much time passes and how much experience you rack up?

by Rudy Rucker
Published in 2007
Published by Tor

PostSingular opens with young engineering wizzes Jeff and Carlos attempting to launch a homemade rocket. Things go horribly wrong and Carlos is killed. This becomes the defining moment in young Jeff Luty's life. Do we now have our main protagonist? Will PostSingular be the story of heroic scientist Luty working to improve humanity while cherishing the memory of his lost childhood friend?

Nope. Jeff Luty grows up twisted and evil. He convinces the corrupt President Dick Dibbs of the USA to deliver to Mars some nanobots ('nants') that he's developed. They will swarm over the planet, disassemble it, and turn it into a gigantic computer for humanity's use. That's the version of his plan for public consumption, at least. What actually happens next is that the nants, fresh from eating Mars, start to devour the Earth and every living thing on it. Humanity is to be resurrected inside a virtual world under the benevolent rule of Dick Dibbs.

But Luty didn't count on his employee Ond Lutter, a genius troubled by something that almost resembles a conscience. He works out a code that will halt and reverse the onslaught of the nants. His autistic son Chu, whose mind bends in precisely the right ways, memorizes his dad's formula before the nants devour him. The resulting indigestion that his mind gives Luty's nants undoes all the damage that they have done. Humanity is saved. Happy ending.

Did I just summarize the entire plot of the book? Hahahahaha. That was just the first twenty pages. Things get much, much weirder when the main plot commences shortly afterwards.

For example, we see the introduction of a new technology that (among other things) allows you to see what's happening anywhere else in the world. Effortlessly. And yes, of course this includes watching your friends and neighbors have sex. (It can be blocked, but it takes industrial-strength technology that most people don't have access to.) But with the passage of time, as far as regular people are concerned it becomes the new normal. Most of the novel takes place after everybody's already used to it.

Bizarre piles on top of bizarre amid plenty of sharp narrative turns (the twentysomething hipster who's the closest thing the novel's got to a main protagonist doesn't appear until a third of the story has gone by) that Rucker somehow manages to avoid turning into a great big trainwreck. A fine stab at helping us appreciate the strangeness of life after the Singularity

And now for something completely different.

The Constant Gardener deals with murder and intrigue among the British diplomatic community in Kenya. It opens with the gruesome murder of Tessa Quayle, a prominent young British activist who had worked tirelessly on behalf of the poor and downtrodden of East Africa. Her husband Justin is a staid and proper functionary in the British embassy who had kept himself deliberately aloof from his wife's work. Now that she is dead, Justin takes an extended leave of absence to investigate her killing.

For whatever reason, from about the halfway point onward Justin Quayle was being played in my mind by Colin Firth, even though I know in official Movie Land he looks like Ralph Fiennes. I dunno, my mental image of the character just fits Colin Firth better.

I approve of John le Carre's ability to construct complex plots, although I will admit that I failed to ever get into the Cold War-era spy novels which he will certainly be best remembered for. I enjoyed The Tailor of Panama when I read it a couple of years ago, and The Constant Gardener is a similarly good standalone novel. I read it without knowing the plot ahead of time, which results in some enjoyable plot twists and turns (the initial viewpoint character, one Sandy Woodrow, turns out to not be the main protagonist but rather an antagonist, and a slimy one at that).

This is a very political novel and the bad guy is Big Pharma. I am personally far too ignorant to opine much about the ethics practiced by the big pharmaceutical companies without very likely making an ass of myself. In my last job I met a couple of people who worked at the main Taiwan office of one of the world's great pharmaceutical companies; more than one of them brought up ethical lapses that their competitors committed in order to make the point that their own company didn't do that sort of thing. Who knows. Maybe employees of every other pharma company would've told me the exact same thing.
Posted by Brendan at 12:36 PM