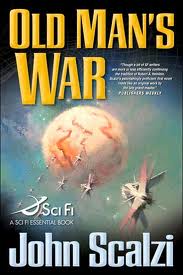 John Perry is a seventy-five-year-old widower living in the American Midwest who joins the army. You see, although Ohio is a relatively peaceful place where old people can die of natural causes, the Galaxy as a whole is an incredibly dangerous place, one where the sentient races fight tooth and nail to gain control over strategically important planets and resources. Humanity has acquired a reputation as a bunch of badasses that you don't want to cross, and the Colonial Defense Forces, the de facto human military for all matters interstellar, is intent to keep things that way.

So they recruit experienced old people, restore them to youth and vigor (and give them green skin in the process, so they can recharge their energy using photosynthesis), and train them to defend humanity from the alien hordes.

I've long known about John Scalzi as a wise guy and sarcastic commentator; that was what he was known for, in fact, long before he ever became famous as a science fiction author. I still think of him primarily as the guy from Whatever.

Actually reading Old Man's War, the novel that basically launched his career as a science fiction novelist and is still the most famous bit of fiction he's ever written, reveals a man who knows how to worldbuild. The Colonial Union, the government for all humans outside Earth (and exercise rather a lot of authority over governments on Earth), is very creepy, in its way. What's more, it is never at all clear that the humans are, in any objective sense, the 'good guys'. The 'battle' where highly trained human troops rampage through a city populated by six-inch-tall humanoids like creatures out of a Japanese monster movie is masterful black comedy.

This unease doesn't come to a payoff in Old Man's War. It does come into play in the sequels, but I see no indication that Scalzi was thinking so far ahead back when he wrote the first book.

I respect that. In fact, I think I like that. I respect a narrative, especially one set in an imaginary universe, that can hold that sort of texture when it's not required by the plot. John Perry is not a bad man, but sometimes he wonders if he has been ordered to do bad things. But he is still a loyal soldier of the Colonial Union.

And the Colonial Union is still very creepy.

But he is still loyal to it, and what's more he is intelligently loyal to it. He's not some dumb thug in a uniform who only knows following orders.