I haven't blogged much since, oh, August 30. I'm not dead, or in a coma, or feeling out of sorts; it's more the fact that I've been busier-than-normal with work lately as well as the fact that my urge to blog comes and goes.

But now that my wife has posted her story of what happened to me last September 9 -- aka The Closest I Ever Came to Being Seriously Injured -- I thought I would post my own version of the day's events.

With our friend Emily visiting from Australia, that Sunday we thought we would return to the waterfall at Yuemeikeng, near Jiaoxi, Yilan County. Yuemeikeng's not very well-known -- tell a northern Taiwanese person you're going to see a waterfall near Jiaoxi and they're almost certain to assume you mean Wufengqi -- but it's gorgeous, as Jenna and I found out last year (see our pictures in the link).

Getting to Yuemeikeng means tracing a river upstream a ways. The water level was much higher than we remembered it, but this wasn't a huge problem as we were prepared to get wet. This isn't the kind of river where you can be swept away by the current.

We reached a big, beautiful waterfall, where the water crashed down into a big, deep pool of water, a pool so deep we couldn't touch bottom despite our repeated attempts. We frolicked in the water for some time, enjoying the respite from the hot Taiwanese summer air.

But it wasn't Yuemeikeng proper -- the really spectacular waterfall was further upstream. We knew. We'd been there. Unfortunately, the steep trail that paralleled the waterfall we'd been frolicking at was not something that gave a sense of well-being. There were some hikers who were managing the climb without much difficulty, but they had professional-looking climbing equipment. We didn't. Jenna made it halfway up before declaring that she would fall if she tried to keep going.

So our choice was to turn around and go back, or find another trail up. (Complicating our decision-making process was the fact that Jenna and I had done this hike before, but neither of us could precisely remember how we'd done it. I wasn't sure whether we'd taken a safer, pre-typhoon version of that scary path up, or a different trail.) We backtracked a bit and found another trail up, one which was steep but seemed doable. We took it up a ways (Jenna in the lead, me in the middle, Emily in the back), but our faith in its ability to convey us safely to level ground steadily waned as it got more overgrown, and we were finally on the verge of giving up and going back down. And then the ground under me slid, and I lost my footing.

Here's where my point of view diverges from the others. But memory's a funny thing. Immediately after the accident, I could remember everything, as I told Jenna and Emily. But with time, my actual memories of the fall seem to have receded, and now what I'm left with are memories of my remembering.

Then I was in the water. I was in the exact spot where we'd been happily frolicking just minutes before. I was wearing my backpack, which contained many things I didn't want to get wet, and my first priority was to get it out of the water. There was a river tracing team coming through, and a woman in the water with me who was trying to help me. But I didn't need her help, I just needed to get my backpack out of the water and then rejoin Jenna and Emily. I kept trying to shove the backpack up onto the dry rocks, but my body felt weak. And my brain was preoccupied with trying to convince the woman that I was okay and didn't need help. It wasn't until Emily scrambled down the hill and arrived on the scene that I realized I was bleeding profusely from somewhere on my head. I'd managed to rip a sizable tear in my scalp.  And that when I was helped out of the water, my left leg would not support my weight. My knee was cut open and my shin was a mess of cuts.

The river tracing team was relieved to see someone was taking care of me (and therefore I was Not Their Problem), and stuck around to see Emily bandage my head and my knee with towels. When I stripped off my bloody shirt, there was a collective gasp from the river tracers at the ugly condition of my left shoulder and left side of my back -- a very nasty collection of bruises and scrapes. I must admit that, as someone who reflexively downplays his own injuries for fear of coming across as a malingering whiner, the river tracing crowd's unbidden gasp of horror at the appearance of my shoulder felt good somehow. Satisfying, in a weird way, like I was being paid a compliment. Ironically, those cuts and bruises turned out to be largely cosmetic injuries -- they looked ugly, but they healed quickly, and didn't give me any trouble.

Emily, who knew first aid, stayed with me to make sure I stayed conscious and to keep my brain active (for all anybody knew I might have suffered a concussion). Jenna, who speaks better Mandarin, went to get help. What followed was me, sitting on a rock for what seemed like a very long time, with Emily keeping an eye on me. I was antsy and uncomfortable (which I apparently managed to hide from Emily well enough), but I couldn't put weight on my left leg, so there was nothing I could do but wait for help. Emily didn't think I'd actually broken any bones, though, so there was that to comfort me.

Eventually a lone rescuer showed up, checked me over, and decided I was fit to be moved. He went back to report to his teammates. A couple of minutes later a couple of rescue guys showed up and announced they were going to get me up the hill and back to the main trail. They did this by tying a rope around me and then half pulling, half prodding me up the hill, often forcing me to put pressure on my bad leg, all the while shouting at me in Taiwanese. (It just had to be Taiwanese. I'm not a master of the Mandarin language but I generally have a good chance of understanding instructions shouted at me in it. Taiwanese, on the other hand, I am hopeless in.)

I was in a really foul mood by the time they got me to the trail. Getting me up the hill was one of the most unpleasant experiences I have ever undergone. But then, it wasn't the rescuers' fault that I had managed to get myself hurt in an inaccessible place. And as for shouting at me in Taiwanese, well, I can't blame local guys for using the language they feel comfortable with.

Once on the real trail, they laid me on a stretcher and I didn't have to do anything. I get the distinct impression that I caused something of a social event, as there were far more people on the trail back to the ambulance than were necessary. We think it was a case of, 'Hey, a dumb foreigner got himself hurt in the woods near Jiaoxi, wanna come see?' Can’t blame them.

I'm very grateful to these rescuers who got me out of the gorge and into an ambulance. As I said, I managed to injure myself in a relatively inconvenient and inaccessible spot, and I was lucky it was in a place where a rescue squad could be quickly called together. (I can only imagine the situation if I had gotten hurt in the remote wilds of mountainous central Taiwan.) 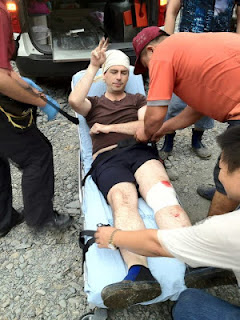 The ambulance took me to a hospital in Yilan, where I received very good care. They gave me a CAT scan and X-rays to confirm I hadn't broken any bones or suffered hidden internal injuries, and the doctor sewed up my scalp and my leg. I was released from the hospital late that evening, and Jenna helped me hobble to a nearby hotel for the night.

Two days later I was working a full schedule again, although rather slowed down and with a large bandage on my head.

I'm happy that I had my health insurance card with me in Jiaoxi. As a foreigner from the land of America, let me say that I am a huge fan of Taiwan's national health insurance system. The funny thing is, even after this experience and the multiple doctor's visits I've had to make, I suspect the Bureau of National Health Insurance has still made a profit from me overall, since I've been working and paying taxes in Taiwan since 2007 and I can think of only two insurance-covered doctor's visits I made before this most recent mishap. By thinking in these terms at all I'm grossly mishandling the very idea of insurance (after all, a person who needs more resources than they have paid into the system over their lifetime hasn’t crossed some sort of Lazy Bum Threshold) but I don't want anyone to read this and think that I'm a foreigner mooching off of hardworking Taiwanese taxpayers' dollars.

By the way, if anyone wants to comment on my blog by taking commentary from the American health insurance debate and inelegantly transposing it to a Taiwanese context, I will publish your comment after receipt of a $150 commenting fee (U.S. dollars).  Thank you for your understanding.

Items lost in the fall include:

The loss of the last two items are made up for by Emily's awesome generosity, who gifted me with a Samsung Galaxy S II that she wasn’t using. It’s the first Android-based device I’ve ever used, so I’ve been cheerfully learning my way around it.

To sum up, I keep thinking about how amazingly lucky I was to survive the incident with relatively minor injuries. Yes, it's been two and a half weeks and I'm still limping along with a cane, but my situation would have been far worse if I'd hit a rock on the way down or had landed somewhere other than a pool of deep water.

But I survived, and with injuries that did not even require an overnight hospital stay. Make no mistake, I don't believe in deities that interfere in human events, but I did get very lucky.
Posted by Brendan at 4:06 PM