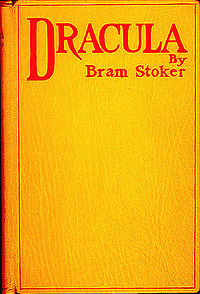 Dracula
by Bram Stoker
Published in 1897

The third of my assigned readings from Professor Eric Rabkin's course Fantasy and Science Fiction: The Human Mind, the Modern World is Bram Stoker's novel Dracula. Stoker didn't invent the idea of vampires, but he codified the trope and most of our modern images of vampires are ultimately descended from Stoker's version of the vampire myth.

The story begins with English solicitor Jonathan Harker traveling to Transylvania to meet with the elderly nobleman Count Dracula to discuss property in London which Dracula wishes to purchase. Dracula turns out to be immaculately polite, the very model of old-timely European gentility, eager to learn more about England and English ways, and (as the reader no doubt expected), utterly, alarmingly creepy. In the end, Harker barely escapes from Dracula's castle alive, his wits shattered.

Meanwhile back in England, Dr. Seward operates a lunatic asylum next door to the property where Dracula is about to take up residence. He is in love with Lucy Westenra, a young lady who is nevertheless engaged and then married to one Arthur Holmwood. Lucy is also best friends with Jonathan Harker's fiancee Mina Murray. (Dracula takes place in a very small universe and coincidences abound.) Lucy becomes deathly ill (Dracula is slowly consuming her, as readers know but not Arthur or Dr. Seward), and Dr. Seward is forced to call upon his mentor from continental Europe, Van Helsing, who speaks fractured English but immediately diagnoses poor Lucy's problem.

There's also an American from Texas, Quincey Morris, who is an excellent example of what British people in the 1890s thought Texans sounded like. He rounds out the team of vampire hunters. Although the novel doesn't really have a clear paramount protagonist, Mina Murray is an early deconstruction of 'useless woman' tropes; when the men are reluctant to involve her because she's a fragile female, things take a turn for the worse; when she's given the same respect as other members of the team, they make progress in their chase against Dracula.

I was surprised at how many recognizable modern-day vampire tropes appeared in Dracula. I was expecting a reading experience more like Mary Shelley's Frankenstein. Most modern-day Frankenstein tropes did not emerge until long after Mary Shelley's lifetime, and even a reader who is aware that Frankenstein is the name of the scientist (not the monster) is usually surprised to learn that in Shelley's novel Frankenstein is not a crazy old man but an over-eager young medical student, and while the monster really is an eight-foot-tall abomination, he can speak quite fluently and is arguably the most eloquent character in the novel.

In contrast, the title character in Bram Stoker's Dracula is very close to his modern-day popular image. The main differences are that this Dracula can walk about outside while the sun is shining (he just can't access any of his special vampire powers) and while a wooden stake can indeed kill him, a steel spike will do just as well. Also, he has a big, intimidating mustache, which generally didn't survive adaptations to other media. Otherwise, the original version of the character is almost identical to his modern image, right down to his grasp of English (he is explicitly described as speaking impeccable English but with a very foreign intonation). The novel invented the idea that vampires can't cross running water, a limitation that makes no sense but does prove very useful to force the plot to keep on the track Stoker has in mind.

In the novel, Dracula has three sexy vampire wives who try to seduce Jonathan Harker and are eventually slain by Van Helsing prior to the final battle with Dracula himself. As Professor Rabkin touched upon in his lectures, before Stoker came along, vampires were seen primarily as female monsters, and Stoker is singe-handedly responsible for the fact that male vampires aren't necessarily perceived as gender-benders today.

As a final odd factoid, Dr Seward may be the earliest character in literature to keep a journal in audio recording form. For what it's worth.
Posted by Brendan at 12:00 AM