Typhoon and Other Stories 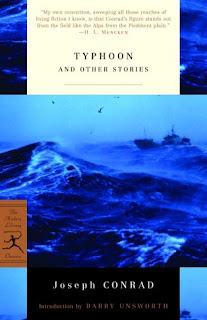 Typhoon and Other Stories
by Joseph Conrad
Originally published in 1903

I promised myself that this year I would read ten novel or novel-like entities written by people who died before 1950. The first of my ten classics is Joseph Conrad's Typhoon and Other Stories, a collection of four stories, ranging from short story to novella length, which have been consistently published as a consistent unit since Conrad originally wrote and published them that way back at the beginning of the 20th century.

Conrad's an interesting figure in the globalization of world history. He was a European who wrote with his heart in Asia and Africa. By standards of the time he was remarkably unconvinced of Europe's inherent right to manage the world. And yet to a modern eye his fiction is influenced by 19th-century notions of European superiority -- he was, after all, only human -- and I've never come across a point in his fiction where we see the world through the eyes of a non-European, or even meet a well-developed non-European character.

Of course, it is worth noting that despite his British citizenship, he was actually a native of Poland, a country that, for most of his lifetime, did not actually exist on maps. In other words, he himself belonged to a colonized people.

He's also respected in English-as-a-foreign-language circles for his near-unique status as a great English prose stylist who couldn't speak English at all until he was in his 20s. (Vladimir Nabokov, among others, is also well-known as a nonnative English speaker who wrote respectable English prose, but Nabokov learned his English as a child.)

Possibly as a result of his linguistic background, Conrad's got an odd prose style, a strange rhythm to his long sentences, that many readers find difficult or maddening. I just happily accept it as part of his particular style. Read Conrad, deal with his sentences. It's part of the package.

Typhoon, the lead novella, is a straightforward adventure story, as a British ship, under a Thai flag, is sailing not far from Taiwan, transporting a boatful of coolies to Fu-chau. (And here I was, thinking the correct old-timey Romanization of the city now known as Fuzhou to be 'Foochow'. I'd be hopelessly lost as a late-19th-century expat.) The ship manages to plot a course straight through a particularly nasty typhoon, providing an opportunity for a host of character portraits of various members of the crew.

In Amy Foster, a peasant from Eastern Europe intending to emigrate to America is the lone survivor of a shipwreck off the English coast and finds himself in a bucolic fishing village. He's not in America, but he doesn't care; he stays and marries the one girl who had been kind to him. Cultural tensions emerge. The story ends tragically, drowned in a sea of irony. Decades later, Hollywood outputs a product that is not intended for my demographic.

Falk takes place in a large East Asian city that is never specified (based on geographical clues I assumed Bangkok) and deals with a cast of characters who are entirely European. The narrator is a sailor who runs into trouble with the local tugboat captain, Falk, who incorrectly believes our narrator has designs on his girl. The girl in question is a Western woman, a relative of a German captain.

(Try as I might, I could find no sign in the narrative that the woman had actually returned Falk's advances, other than blushing and demurely looking down at her knitting when he came over to visit. Presumably, at that time, such a response was considered equivalent to crying, 'I love you, my dashing Captain Falk! And yes, I will marry you!')

And then Falk confesses that there is something about him, an episode from his past, which the woman and her family ought to know about before accepting him as part of the family. Let's just say I did not see that particular plot twist coming, and leave it at that.

To-morrow (the title's got the old-fashioned hyphen and everything) deals with a young woman who lives with her blind father in a seaside village, and her crazy old landlord who lives next door. The old man's son vanished overseas several years ago, but the father remains convinced that not only is his son alive, but he is returning home 'to-morrow'. (No matter how many years pass, the old man is always certain his son is returning 'to-morrow'.) He intends to marry his phantom son off to his young lady tenant when that happens.

Then one day, the son actually shows up. The father, of course, doesn't recognize him (after all, he's not supposed to appear until to-morrow). Drama ensues.

I do have to admit that on one level I feel like I read Conrad more for the history than for the literary qualities. Yes, the man was a literary genius, and I don't find him difficult. (To give you an idea of where I'm coming from, most 19th-century British literature I've read, I found to be easy to read and engaging. However, despite repeated attempts, I absolutely cannot stomach Jane Austen. I don't know why. Other people can have her.)

However, there's the pervasive sense that, more than his contemporaries, Conrad's writing is 'good for me', in both the positive and the negative senses of the phrase. Immersing my mind in Conrad's context of 19th-century globalization is good for me. That is why I read him. Enjoyment of what I'm reading takes a back seat.
Posted by Brendan at 8:29 PM