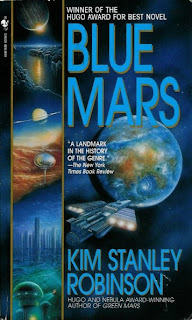 And so the trilogy reaches its end. Blue Mars opens with a newly independent Mars. Earth is a royal mess, having been hit by a horrific ecological disaster that was, surprisingly enough, actually not the fault of human beings. The Martians took advantage of the chaos and broke away at the end of Green Mars. As Blue Mars begins, the pieces are just beginning to be put back together.

I find it difficult to summarize a traditional plot for Blue Mars. It's the story of the evolving political situation on Mars, in the planet's first few decades as an independent entity. And it's the story of Mars' relations with a devastated but still powerful Earth, vast and varied and impossible to describe glibly with throwaway descriptions, home to many who view Mars with wary curiosity, and maybe, just maybe, would like to get off Earth and move there one day. (This is the source of much consternation and controversy among the Martians.)

But events are always seen through the eyes of individual characters. Each novel in the Mars trilogy covers several decades of in-universe time, and by the end of Blue Mars more than 150 years have elapsed since the beginning of Red Mars. Thanks to medical advances, we end the trilogy with the same core group of main characters, members of Mars' First Hundred, that we began with (although there has been attrition due to deaths).

There are new, younger characters, the descendants of the First Hundred, who dominate the narrative for whole sections of the book at a time, but in the end the story always shifts back to the perspective of one of the over-200-year-old protagonists.

As a result, we never stop seeing Mars from the point of view of approximately a half-dozen slightly astonished old people who have seen massive change in their lifetimes. These oldsters are practically immortals, symbolic of particular ways of thinking, of points of view, of ways of seeing the universe, and they remind me of the protagonists of Robinson's Years of Rice and Salt, who keep getting reincarnated into new bodies over the centuries as history progresses. (But they are not literally immortal. As it turns out, humans over the age of 200 have an alarming tendency to drop dead suddenly of no clear cause.)

Although the author has acknowledged that the terraforming of Mars happens more quickly in the Mars trilogy than is strictly speaking realistic, the technology of the Mars trilogy never strays far into the fantastical. (As opposed to, say, Greg Bear's superficially similar novel Moving Mars, another story of Martian politics and independence, in which the level of technology is realistically advanced for the novel's first half, but then leaps into 'indistinguishable from magic' territory.)

This just makes the expansion of humanity throughout the solar system all the more exciting. By the latter half of the novel's timeframe, there are permanent human cities from Mercury to Neptune and Pluto, and the first starships are beginning to leave our solar system for lands unexplored. (One of our principal characters departs on one of them, never to return). Humanity has escaped Earth for good, and it's all the more exciting when it happens in the hands of an author who treats space travel realistically. Robinson uses the phrase 'accelerando' for the phase of humanity's existence when we are spreading through the solar system and technology is developing at a rapid clip, teaching me that it was not, in fact, Charles Stross who was the first to use it this way.

One thing I want to say about the Mars trilogy here that I didn't say in my entry on Green Mars is what a fundamentally optimistic work it is. Humanity has its problems, we squabble with one another and are unforgivably short-sighted, we can be cruel and petty and mean, but this is a universe where by joining together and being civil to one another, we can muddle our way through. The Mars trilogy ends on a note of hope. The future's going to be bright.
Posted by Brendan at 10:45 AM