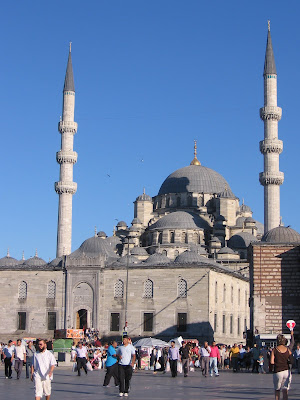 Istanbul is hilly. There's a story that Constantinople was founded where it was because Rome has seven hills, and the site of Constantinople also has seven hills. Well, I can say that there are hilly streets in Ortakoy, several kilometers outside of the city as it existed in Byzantine times, that are at a grade I didn't know existed outside of San Francisco. We got vertigo riding a taxi down one of those streets. 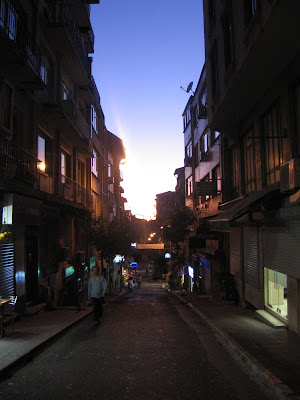 Istanbul is full of cats. And often they're the fattest, healthiest street cats that I've ever seen. We've speculated that maybe some Ottoman sultan really liked cats and declared that no cat in the empire was ever to come to harm. There does seem to be a continuum between cats who are a specific person's pet who happen to spend a lot of time outdoors, to cats who don't belong to anyone in particular but seem to be collectively cared for by a neighborhood, to cats who are genuine strays but at least they're lucky enough to be strays in Istanbul. 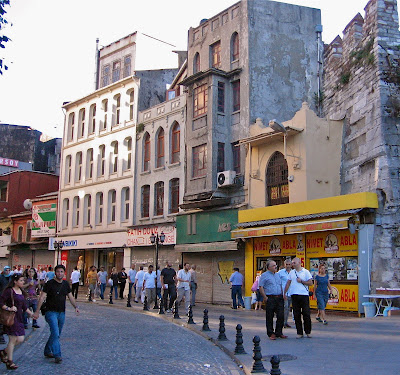 Istanbul has street food. It varies in quality. The corn on the cob you can buy from street stalls turned out to be astonishingly mediocre. But anything bread-based was generally quite good. I had simit (a ring-shaped bread covered with sesame seeds) for breakfast almost every day, always bought from the same guy in Taksim. Our personal favorites were the mussels, sold with a clump of flavored rice and a squirt of lemon. They were cheap and didn't make us sick even once. 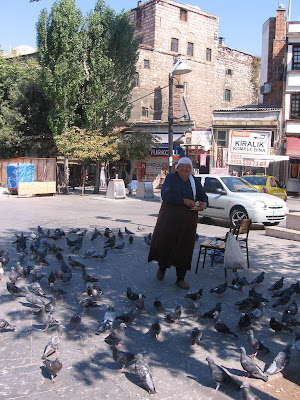 Istanbul has its traffic problems, but things are getting better. We chose an apartment that was only a short subway ride to our school in Levent (thus giving us an easier experience than some of our classmates, who lived over on the Asian side and endured far more difficult commutes). Public transit is really not sufficient, but where it exists it does its job well, and the city is in the process of expanding and building more rail lines.
(All photos by Jenna.)
Posted by Brendan at 2:27 PM