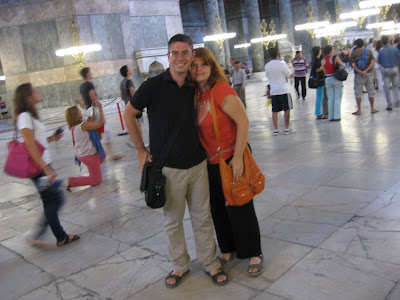 On September 7, we arrived in Istanbul. The CELTA course ran from Sept. 12 to Oct. 7, so we had four days of sightseeing first before getting down to study.

Istanbul's divided into European and Asian sides by the Bosphorus. The European side is further divided by the Golden Horn, with the bulk of the old city to the south and the center of modern Istanbul to the north. Although we'd traveled widely in Asian Turkey, we never set foot in Asian Istanbul the whole time we were there. Our apartment and school were in Europe, as are most of the places tourists are encouraged to visit; we never felt the need (or had the time) to cross the Bosphorus.

The Hagia Sophia had been closed during our day in Istanbul in August, so of course it was our first priority on our return. It's one of those famed tourist attractions that fully live up to their hype. It's always full of tourists, but with its vast size it can easily hold them all without getting cramped (unlike, say, some of the old churches in Cappadocia). 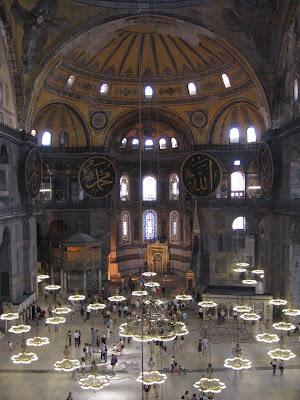 The Hagia Sophia is no longer a mosque, so visitors can wander throughout it without worrying about propriety. However, that also means that unlike a mosque, you have to pay to get in.
It's worth it, for the chance to wander about, admire the architecture, and get in plenty of your fellow tourists' photographs. 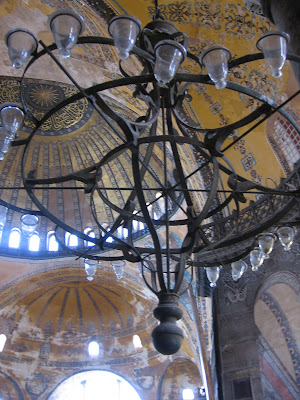 The Hagia Sophia is old. It predates any of the European nation-states. When it was built there was no England; there were only a handful of squabbling Anglo-Saxon kingdoms. There were no French or Italians or Russians as we know them today, only assorted tribes. There were no Muslims anywhere; Islam would be introduced a century later. China hadn't been a unified country since the collapse of the Han centuries earlier; there was no particular reason to expect a Chinese empire would ever rise again.
The Hagia Sophia is old, and it still stands. Its Wikipedia article reveals that it has been severely damaged on several occasions, and its dome has collapsed more than once, but it was always promptly rebuilt. I can't think of another building, anywhere in the world outside Istanbul, that is as old as the Hagia Sophia and still so well-preserved. (The Pyramids don't count -- they're not buildings in the sense of something that must be continuously maintained.)
I know of one building in Istanbul that rivals the Hagia Sophia in age: the Little Hagia Sophia, the still-functioning mosque on the city's southern edge that was slightly pre-dates its larger, more famous architectural cousin.
I'm curious. Is there a building (in the sense of a structure that people could work and live in) anywhere in the world that pre-dates the Little Hagia Sophia, and hasn't collapsed into ruins?
Posted by Brendan at 1:40 PM