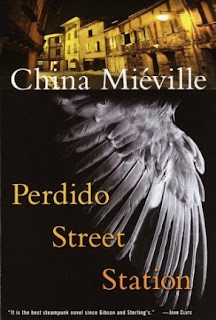 Isaac Dan der Grimnebulin is a scientist in the sprawling, immensely squalid city-state of New Crobuzon. One day he is sought out by Yagharek, a member of a race of flying creatures who was forced to sever his own wings as a punishment. Yagharek wants Isaac to restore his ability to fly. Isaac is excited by the intellectual challenge, as well as the formidable amount of money Yagharek seems able to offer him. Some very, very bad things happen as a result.

A decade after publication, China Mieville's Perdido Street Station is considered a modern-day classic. It's Mieville's most popular work and the first of his novel set in the epic world of Bas-Lag. Mieville created Bas-Lag as a reaction against the Tolkein-derived worlds you see all over the fantasy genre. In fact, it seems very limiting to call the Bas-Lag novels fantasy at all; what Mieville appears to have done is draw a Venn diagram with circles representing science fiction, fantasy, and horror, and then stake out his territory where the three overlap.

Perdido Street Station, and the other novels set in the Bas-Lag universe, are fantasy in the sense that they take place in a world where magic exists, although the five-letter "M" word itself is hardly anywhere to be found. Wizards exist, but they are called thaumaturgists. The books feel science-fictional. The forces that thaumaturgists draw on are no more magical to them than gravity is to us. Isaac and his counterparts are scientists, and if their science bears little resemblance to our understanding of the term, that's only because their universe obeys different laws than ours. The Crisis Engine may not run on any principles Newton or Einstein would have recognized, but the academics of Bas-Lag have a good understanding of the theoretical underpinnings, and that's good enough for them.

I said that Perdido Street Station occupies the part of the diagram where three genres overlap. The Bas-Lag books are tales of horror. I would never want to live anywhere in Bas-Lag. Not even if I got to occupy a relatively privileged stratum of society. New Crobuzon is an awful, horrible place, which Mieville lovingly describes every bit of.

A lot of people are turned off by Mieville's writing. A few weeks ago, John Scalzi's Old Man's War got voted the best SFF novel of the decade on Tor.com, and Scalzi very graciously said that while he appreciated the honor, if it were up to him to choose, he would pick Perdido Street Station instead. Comments to his post included a variety of opinions on Mieville's writing style. While several comments were from fans of the novel, there were also posts like:


I am one of the minority who didn’t like “Perdido Street Station” much at all. I can agree that It was an extraordinary book to read and parts of it will stick in my brain but if we liken it to food then it was food that had so many weird flavours it just tasted badly on my tongue. This was a book that gave me the same sensation that movie District 9 did, as though I had crawled into a vat of something oily, full of creepy-crawlies and twisted.

I got about haflway through Perdido Street Station before throwing in the towel. I estimate he spends about a third of every chapter describing how dirty the city is and the remaining two thirds talking about characters about whom I just could not bring myself to care.


Perdido is a gorgeous novel, but I can’t bring myself to re-read it because it’s just so depressingly dark. In the same vein, it’s hard for me to recommend, because I really have to know the reader will enjoy something despite/because of the visceral pain.

As for me, I loved it. I loved the density of the world-building and how everything fit together. I loved the Neal Stephenson-esque pacing. I loved the Weaver and the free-verse poetry it spouted. I loved the logic behind the science.

Perdido Street Station was my second Mieville book. Last year I read The Scar, which is also set in Bas-Lag and has a very tenuously connected plot (it's not really a sequel, and you can read one book without spoiling the other). I'll never be able to write like Mieville, and his books take a long time to read. But I love his style.
Posted by Brendan at 10:10 AM