Scoop-Wallah: Life on a Delhi Daily by Justine Hardy 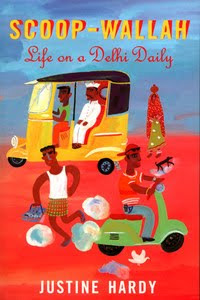 In which we read English journalist Justine Hardy's account of her time working as a staff reporter for the Indian Express. She mixes the standard foreigner-eye-view of life in a big, dusty Indian city with accounts of editors who want her to do fluffy feature stories rather than the hard news she prefers, and upper-class Indians who wonder why she is even doing a job that they feel an Indian journalist could do just as well.

Overall I enjoyed Scoop-Wallah quite a bit for its descriptions of 1990s-era upper-crust Delhi society, and for the stories of the northern half of India -- the geographical half I have yet to visit. The writing was a bit odd for a memoir. The first section, dealing with her move to Delhi, reads like any other obligatory "Westerner arrives in strange new country of India" chapter. But later in the book it's made clear in asides and background information that she hadn't been a complete India newbie at the time; in fact she'd already had substantial experience in the country. Shouldn't there have been a few sentences inserted in the first chapter to make this clear?

That said, Hardy does a decent job balancing High Society (she likes polo, she's got friends in high places, and the Dalai Lama even makes an appearance) and The Common People (particularly in the chapter dealing with Gautam Vohra and his organic farm project). I'll probably visit Delhi myself one day, and while it'll undoubtedly be a different city from the Delhi of the 1990s that Hardy writes about, there are, as they say, no full stops in India.
Posted by Brendan at 11:05 PM