The Lyttle Lytton Contest is a variant of the better-known Bulwer-Lytton Fiction Contest. The aim of the Lyttle Lytton is to create snippets of deliberately awkward or stilted prose. My favorite of the 2009 winners is this, from Adam Box:

I have the ability to go through time, he suddenly remembered while at a bus stop near a tree.

The whole sentence is a thing of beauty. I also like Deborah's walking adventures and Peter's lack of passion for surfing, but they can't beat suddenly remembering you have the ability to go through time. While at a bus stop. Near a tree. 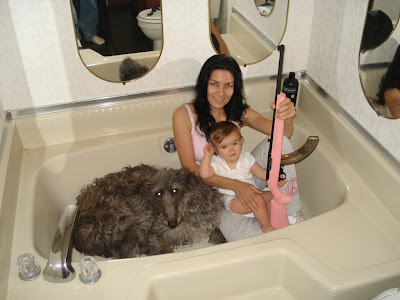 That's a startling picture. Like a Lyttle Lytton sentence, there really isn't all that much to it. But the human brain simply can't take it all in as a cohesive whole. You can only focus on one aspect of it at a time, while ignoring everything else.

Imagine you had to describe that picture in words. Where would you begin?

I'd probably describe the woman and the baby and the bright pink rifle and the "peace" symbol on the pants and how the baby's hand is on the trigger. And then I would describe the woman and the baby and the rifle in ever-increasing detail, much as some mentally disturbed patients draw intricately detailed mandala designs because they crave a feeling of order and centeredness in a universe that's fundamentally chaotic and alien. Everything else would get pushed to the side. Forgotten about. My mind can't integrate all that.

There's a weird, sublime beauty here.
Posted by Brendan at 11:28 AM