This is Air Canada.

This is an official form on the website of my home state in the USA.

Imagine how you would feel if, every time you had to fill out an online form, you had to cross your fingers because you knew your country’s name might be twisted in a insulting way.

It's fine to not be an expert in East Asian geopolitics. No one is an expert in everything. So here is a brief explanation of why we are so angry about this.

But none of the screenshots above say "Taiwan (Republic of China)".

Q: So why is “Taiwan, China” so offensive?

I’m not going to mince words here. The government of the PRC would like nothing more than to take over Taiwan and incorporate it into their territory (and it’s easy to see why -- geopolitically it would be a wonderful strategic prize). This is not the ranting of a conspiracy monger -- China isn’t even trying to hide its intentions. Publicly at least, they won’t rule out the use of military force to conquer Taiwan. But as that would be extremely risky, they would much rather wear Taiwan down, demoralizing it so that its people see annexation as the inevitable choice.

Whether China takes Taiwan by force or by “peaceful” coercion, it doesn’t want the rest of the world to see it as a larger country taking over a smaller, less powerful country. That would look very bad. Instead, China wants the rest of the world to see Taiwan as a recalcitrant part of China that needs to be brought to heel. That’s why (among many things) it’s got people pushing to change “Taiwan” on those drop-down menus to things like “Taiwan, China” or “Taiwan, Province of China”. It’s all about changing the world’s perception of Taiwan so that if Invasion Day comes, the rest of the world doesn’t see a large aggressive country invading a smaller country.

And every airline that lists Taiwan as China and every educational institution that forces students to declare their country as “Taiwan, China” is complicit in this. With Beijing -- not politically neutral.

As I said above, imagine if you knew that every time you filled out an online form, there would be a moment of uncertainty before you learned if you would be forced to render the name of your country in a deliberately insulting way, And the hopelessness you would feel if you knew that it wasn’t an aberration, but rather fast becoming the norm.

Incidentally, in two of the three examples above that I provided screenshots for (all but Air Canada), Hong Kong, which is actually ruled by China, is just “Hong Kong”, not “Hong Kong, China”. I suppose there’s no need to insist on adding the word “China” if it’s actually part of China.

Q: What about “Taiwan, Province of China”?

Well, everything I wrote above applies to the weird variant “Taiwan, Province of China”. But for everyone who says “It’s technically correct if you assume ‘China’ means ‘the Republic of China’, I have something to show you.

The Republic of China does indeed include an administrative area called “Taiwan Province”. And here are its borders, courtesy of Google Maps: 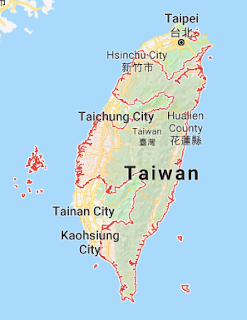 “Taiwan Province” covers part of the main island of Taiwan, but not the parts under the administration of the largest cities: Taipei, New Taipei, Taichung, Tainan and Kaohsiung. So someone living in Taipei or Taichung does not live in any “province,” no matter how generous and flexible the interpretation of “Taiwan, Province of China”.

Of course this is all somewhat beside the point; I’d be mad as hell if I lived in Hualien or Hsinchu and an online form forced me to say I lived in “Taiwan, Province of China”.

“Taiwan, Province of China” was never an attempt to be “technically correct”; rather, like “Taiwan, China” it’s just trying to denigrate Taiwan in the eyes of the world and make people think it’s already in some way under the thumb of Beijing.

Q: Hey, wait. You’re making out Taiwan to be a separate country, but didn’t I hear somewhere that the Taiwanese government sees itself as the rightful government of all of China?

A: You’re just not letting me get away without giving a history lecture, are you? Look, back in the 1950s and 1960s, the rulers of Taiwan were the same guys who ruled China before Mao took over in 1949, and they absolutely saw themselves as the rightful rulers of China and produced loads of official propaganda to that effect. They also headed a terribly unpleasant military dictatorship and Taiwan is much better off not being ruled by them any more. There are still a few “retake the Mainland!” guys around, but today few people under the age of 80 seriously think the Republic of China ought to retake its old territory.

The Taiwanese government’s claims on China are a relic of an earlier age. They still maintain them because the Chinese government has threatened war if Taiwan makes a break with its past -- that would, in China’s eyes, mean Taiwan was officially taking steps away from eventual unification. It’s possible that China is bluffing. But it’s awfully easy to say Taiwan should call China’s bluff when you’re not the one with missiles pointed at you.

Yes, a minority of Taiwanese genuinely want Taiwan to be a part of China. This is because human beings are capable of holding a variety of political positions, and Taiwan is a free country where people can be open about their political beliefs. It’s not the opinion of most Taiwanese.

A: OK, there is a lot that can be said here, from the fact that this is an extremely reductionist and ridiculous way to decide if a country should legitimately exist or not, to the fact that not all Taiwanese have Chinese ancestors. But I’m just going to make an observation.

According to Wikipedia, nearly three quarters of the population of Singapore is of Chinese heritage. But no Singaporean is afraid that they’ll have to start telling foreigners that they’re from “Singapore, China”.

Singaporeans, and the millions of people in Thailand, Malaysia, etc. who also self-identify as Chinese, have a luxury that Taiwanese people lack. They can call themselves Chinese all they want and no one will think that de-legitimizes their actual native country. Beijing’s not putting out disinformation that Singapore is a wayward Chinese province. As far as I know, Beijing doesn’t have missiles pointed at Singapore to keep them from acting too independent.

Q: Who are you? You’re not even Taiwanese, are you?

A: I’ve lived in Taiwan since 2007. I try to play a role in the civic life of the country where I’ve had legal residency for the past eleven years, though I admit I’m not always as active as I know I should be.

Currently, in my day job, I work with Taiwanese students who want to study abroad in English-speaking countries. Therefore, I am angry that both IELTS and TOEFL, the two biggest international English proficiency exams, both have switched online designations to “Taiwan, China”.

Q: So why don’t we hear from Taiwanese people, rather than a Westerner like you?

A: Taiwanese people ARE speaking up. But let me point something out, just as an example.

In August, as I said before, the TOEFL exam changed Taiwan’s designation to “Taiwan, China”. The protest from Taiwan was impressive, with “an open letter that claimed to have the backing of more than 5,000 students”.

As of today, TOEFL hasn’t changed anything. Honestly, can you blame Taiwanese people if they are becoming fatigued at fighting the same battle, again and again, and nothing happens?

Incidentally, I sincerely hope no one reads this post as "Westerner explains to Taiwanese how they should feel about their own country". It is absolutely not my intention to tell Taiwanese how they should feel, and in fact I hope Westerners seek out Taiwanese voices on this issue. Rather, my intention is to counter to any Westerner who thinks "Taiwan, (Province of) China" is in any way "technically correct", and is anything other than an insult.

Note: This post began life as a rant directed specifically at IELTS when they changed Taiwan to “Taiwan, China”. People seemed to like it, so I reposted it after making it more general in focus, and adding a bit more on “Taiwan, Province of China”.
Posted by Brendan at 11:48 AM