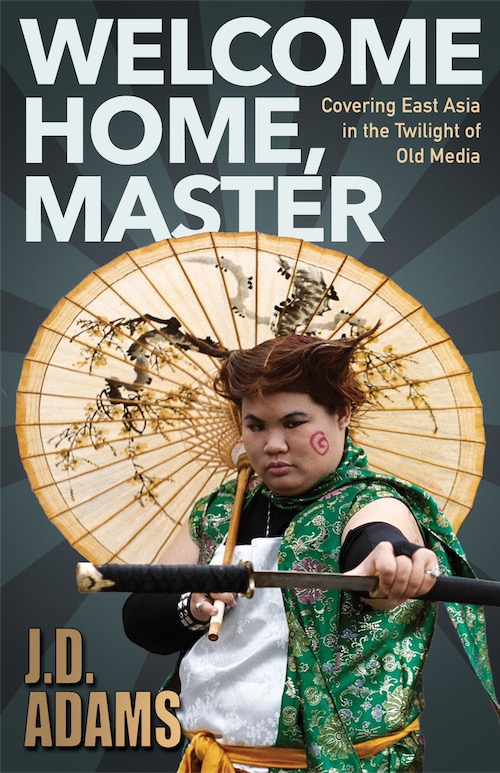 J. D. Adams’ memoir of his years as a Taiwan-based reporter actually opens with a reporting trip to Japan he took in 2010. He went there to do research for a weighty piece about how Japanese companies increasingly rely on temporary workers. These workers get far less job security (and kind of a raw deal overall) compared to standard employees.

While in Japan, he also does a puff piece on a local fertility festival that has become a kitschy celebration of the penis. One of these stories was far more click-worthy than the other -- anyone want to guess? Such is the life, it turns out, of the Old Media journalist nowadays.

Adams then takes us back to the dawn of the 21st century, when he started his career in Asia hanging out with old-school foreign correspondents in Hong Kong, most notably the venerable and legendary Clare Hollingworth. (Remarkably, as of 2016 Hollingworth is still living in Hong Kong, more venerable than ever as her age is now well into three-digit territory.)

Deciding this was the life for him, Adams eventually settled in Taipei, where he worked as a copy editor at the Taipei Times while also reporting as a stringer for Newsweek, which over the next decade would slide into irrelevance (good luck, Old Media). Taipei would become his primary home for the next several years, and so in Welcome Home, Master he goes into more detail about Taiwan than any other place.

If you’re already a Taiwan expert, you may not learn much new here, but newbies will gain a sense of the country’s politics (Adams arrived midway through the Chen Shui-bian presidency and stayed for much of the Ma Ying-jeou administration) and issues (apart from the usual cross-strait diplomacy, he does several stories dealing with traditional Taiwanese religion in its myriad eclectic forms, reports from the 2009 World Games in Kaohsiung and does a story on an Aboriginal village willing to take in nuclear waste in exchange for financial support).

Adams writes in a clear, compelling prose style which is about himself to exactly the right degree: he describes his accommodations in Taipei and his degree of fluency in Mandarin to add color to his writing, but he never lets the writing be about him. Until the final chapters, I didn’t know he had a significant other/girlfriend/wife.

The final Taiwan story Adams includes is the tale of the Hsichih Trio. In 1991, three teenagers were implicated in a brutal murder in the Taipei suburb of Hsichih (or Xizhi, in this country that confuses the hell out of foreigners by using multiple Romanization systems at the same time and sometimes follows none of them). The principal suspect in the case was convicted and executed, but the police were convinced that he had accomplices, and so the three young men were allegedly tortured into providing confessions. In 2010, Adams interviews the man he calls the most articulate of the three, who describes the mistreatment he suffered at the hands of the police and of the time he spent in prison wondering if he would be executed. By discussing the public controversy around the Hsichih Trio (who would be exonerated in 2012), Adams turns the focus on elements of the same politically-oriented civil society that J. Michael Cole has written about recently, as Taiwan transitions from the brutal state it once was to the more gentle society it is in the process of becoming.

While based in Taiwan, Adams wrote stories from neighboring countries as well. He describes reporting trips he made investigating the the tiger-parts trade in China, insurgencies in the southern Philippines, and the whale meat industry in Japan, to name just a few. (Also while in Japan, he writes another trendy ‘quirky Japan’ piece about a cafe where the clientele is waited on by girls dressed as maids acting all subservient -- the source of the book’s title, for those of you who have gotten this far in my review and are still scratching their heads at it.)

Throughout Welcome Home, Master, Adams provides a fascinating description of what it’s like to be a foreign correspondent for declining Old Media behemoths in the first decade of the 21st century. He ends his book getting out of the business completely in 2010, and while he clearly believes an end of the glamorous era of the foreign correspondent is at hand, he is not all doom and gloom: he is optimistic that low-paid part-time stringers, more versatile and with a deeper understanding of the place they are covering, can pick up the slack. I am not 100% convinced that this is desirable, either for the quality of international news reporting or the quality of life of these ‘stringers’, but it is true that decent reporting requires a deep understanding of the local situation -- perhaps deeper than a professional foreign correspondent who parachutes in is capable of providing.
Posted by Brendan at 10:55 AM