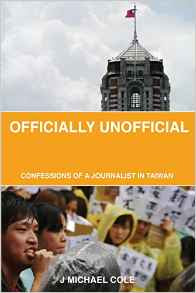 J. Michael Cole is one of the best-known Western journalists based in Taiwan. His 2014 book Officially Unofficial details his first several years in the country and his time working for the Taipei Times, which of course spiraled into unpleasantness, culminating in his angry breakup with the Times in 2013.

Huge swathes of this book felt as if Cole was recounting various controversies he has been involved in primarily to make sure his side of the story was getting out there so it could be read and understood by everyone. Of course he has every right to do that, but I won’t necessarily trust him as an objective source of information on what went on at the Times during his tenure. (That said, I do agree that the paper has declined precipitously in the time I've lived in Taiwan, or perhaps my standards have just evolved. My subjective impression is shown by the fact that in the time I’ve lived in Taiwan, I have gone from buying a paper edition of the Times to read every day, to skimming the headlines online when I bother doing so. For me, the nadir of stupidity came in May 2014 when they ran 'Game of Thrones may be based on Taiwan' on the front page. Seriously, on page 1!)

But Cole is still a compelling writer (though I never fully warmed to his writing the book in occasionally awkward 3rd-person prose) and there is no doubt that he is well-informed about Taiwan affairs. His clear writing gave me a modest education about two things that I felt I could trust him to teach me about objectively.

First, I learned a lot of background information about political events in Taiwan during Cole’s tenure at the Times. I’m somewhat ashamed of this, as most of this recent history happened when I was in Taiwan and so I feel I should have been more knowledgeable already. I think I’ll have to be more observant of what’s happening in this country in the future.

Second, I learned a lot about the daily life and struggle of reporting; of cultivating and maintaining contacts, of schmoozing with your contact over drinks to get useful tidbits of info out of them. I don’t have the right personality traits to be a good reporter, but Cole’s description of the life of one was genuinely interesting to me.

Officially Unofficial contains Cole’s occasional rant about how he feels the hidebound, traditionalist nature of Taiwanese society is dangerously holding the country back. (He admits that many societies in the world suffer from similar problems, but he points out most of them do not sit next to extraordinarily large neighboring countries that want to annex them.) His ‘Afterword’, written midway through 2014, paints a far more optimistic picture. By this time the younger generation of Taiwanese was beginning to make its political power felt and respected, and Cole’s hopes for the country are buoyed by young activists such as Lin Ting-an and the future Sunflowers Chen Wei-ting and Lin Fei-fan, all of whom he mentions in the book’s final section. We get the first appearance of the word ‘Sunflower’ in what is literally the book’s final paragraph.

One almost expects a dramatic To Be Continued… at the end.
Posted by Brendan at 12:27 PM