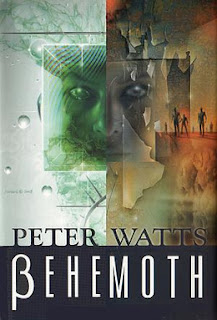 βehemoth
by Peter Watts
Published in 2004
Published by Tor

Five years have passed since the events of Maelstrom. The βehemoth life-form -- yes, it's spelled with a beta -- has ravaged North America, causing a general collapse of government and infrastructure. The rest of the world is desperately hoping βehemoth can be contained, and reflexively lobs missiles at any attempt to leave the troubled continent. The North American corporate elite has retreated to Atlantis, a habitat on the bottom of the Atlantic Ocean, to wait out the end times. They have been joined by the surviving Rifters, cybernetically-enhanced transhumans built for working on the ocean floor for whom the Rifters trilogy is named. The rifters hate the corporate types, or 'corpses'. The corpses hate the rifters. They've already tried to wipe each other out once, and each side still has an impressive array of armaments left over.

But both sides would also like to stop βehemoth, which everyone expects will eventually chew its way across the entire planet and wipe out all life. Our designated hero is Lenie Clarke, the rifter who spent much of Maelstrom spreading βehemoth willy-nilly across the American and Canadian West. To be fair, she is on much more stable mental and emotional ground now that we've reached the final volume, and does occasionally show a flicker of remorse for her past actions.

Other characters include Ken Lubin, a rifter trained as an assassin, who makes your typical Hollywood action movie hero look like a cowardly weakling; Patricia Rowan, spokesperson for the corpses and former high-level mover and shaker; and Achilles Desjardins. Desjardins was one of the people trained to make the tough 'kill ten people to save a thousand' decisions. His brain chemistry had been tampered with by his superiors to give him an artificially tweaked conscience. Then, at the end of Maelstrom, it turned out that a colleague with strong political activist leanings had infected him with a virus that stripped him of all conscience, natural and artificial, so that he'd be able to act on his own moral sense without any interference. That turned out to be a great idea. (Tone doesn't always carry in blog writing. Was that sentence supposed to be sarcastic? Read the book and find out!)

Let's revisit what I said about the previous books in the series. This is from my blog post on Starfish:


This is not happy, optimistic science fiction. This is horror. There are honest-to-God sea monsters down there. Not to mention the psychological tension and continual sense of unease that pervades the book. You don't read Peter Watts for a happy fun time.


And this is on Maelstrom:

So, let's recap. The protagonist is an insane woman spreading carnage and destruction throughout western North America as she tramps off on a perverse quest that has no rational basis, who does not care that her actions cause numerous innocent deaths. The antagonist is the person who is in charge of saving the world. And the Internet is where bizarre inhuman monsters live.


And, the hell with it, here's what I wrote about Peter Watts' Blindsight last year. Blindsight was a novel Watts wrote later on, not set in the Rifters universe:

Blindsight has a 'love and cuddliness' quotient of zero. There is no happiness to be found in these pages. No hope, and no optimism, and the only positive emotion is a purely intellectual spirit of discovery, unless you also count the sizable portion of black humor. Depending on your own mindset and background, you might find there are no sympathetic characters at all.


You may be seeing a pattern here. βehemoth is one of the most unpleasant, squirm-inducing works of fiction I've ever read. (If depictions of sexual violence particularly bother you, you might be better off skipping the Rifters trilogy altogether, or at least stopping after Starfish.)

It is also profoundly depressing, the story of a human race which seems to be on its absolutely last legs, and when the first indications appear of a slim hope of survival for the world, it comes as a genuine surprise. It didn't help that Watts set large swathes of the second half of the novel in a βehemoth-ravaged post-apocalyptic eastern Maine, not far from where I grew up. And very, very few of the named characters are still living by the time the novel reaches its conclusion. (That said, with one important character, whether she survives or not is left ambiguous, and it's very frustrating because I got the impression Watts thought her fate was much more clear than it actually was.)

All that said, the Rifters trilogy is fascinating. It's a look at a hypothetical future where humans have really screwed things up on Earth, to the point where in the best of times a large portion of GDP is spent cleaning up our messes and repairing our self-inflicted wounds. In a weird way it's optimistic, as you consider that there's a good likelihood that not all of the bad stuff Watts predicts will come to pass.

I'm happy I read the Rifters books, but now I feel like I need to read some light frippery to cleanse my psyche.
Posted by Brendan at 4:20 PM