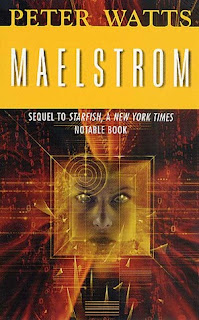 Maelstrom
by Peter Watts
Published in 2001
Published by Tor

When I read Peter Watts' Starfish a couple of weeks ago, I wrote the following:

This is not happy, optimistic science fiction. This is horror. There are honest-to-God sea monsters down there. Not to mention the psychological tension and continual sense of unease that pervades the book. You don't read Peter Watts for a happy fun time.


So, needless to say, I went back for more.

Starfish was the claustrophobic story of a team of psychologically damaged individuals -- the Rifters -- working in unspeakably close quarters in a station at the bottom of the sea, with honest-to-God sea monsters swimming around outside. Maelstrom is not claustrophobic. Peter Watts has opened up the setting and shown us the world. And what a horrible place this world is.

As the first novel progresses to its climax, something very dangerous is uncovered at the seabed: a microbe dubbed βehemoth. βehemoth is a relic of the earliest days of life on Earth. It is a life form completely unrelated to anything in our current biosphere; it has several structural advantages that would give it a leg up in evolutionary competition with the microbes we're used to, but pure random chance 4 billion years ago consigned it to the bottom of the ocean. If it ever establishes a foothold on dry land, it will very likely breed and breed, and clog up our biosphere, and eventually kill us all.

And this sets up the remainder of the Rifters trilogy, of which Maelstrom is book 2.

Peter Watts thoughtfully set the events of Maelstrom in the year when I will be seventy years old, a year in which I intend to be fully alive and aware. That helps make the screwed-uppedness of the world more immediate for me. Climate change has wreaked all sorts of unforeseen havoc on the world's weather patterns, and natural evolution (egged on by genetic engineering) has produced all sorts of superbugs that the authorities are busily containing by Any Means Necessary. Large swathes of the west coast of North America are refugee camps full of Asians displaced by climate-related disasters. The situation there is not helped by the massive earthquake/tsunami combo unleashed at the end of Starfish, which most people do not yet realize was triggered by a deliberate nuclear explosion meant to annihilate the Rifters, who were presumed to be infected by βehemoth.

Lenie Clarke, the closest thing the trilogy has to a main protagonist, survives. Clarke, like the other Rifters, is psychologically damaged by years of childhood abuse. But she has formidable survival skills, and can handle herself well in a fight. Not realizing she's carrying the βehemoth microbe, she sets off over land on an ill-defined journey to an uncertain destination. The calculating government bureaucrat Patricia Rowan is determined to track her down and stop her.

There are several other viewpoint characters, some of whom have had their conscience tampered with by the authorities. There are also some who only think their conscience is still being tampered with, which raises some interesting philosophical questions about the placebo effect. And then there is Maelstrom itself, which is the vast wild frontier that our Internet eventually evolves into. Maelstrom is an ecosystem where Darwinian evolution, quite uncontrolled by human beings, takes place among the native life at an astonishing speed. The Maelstrom-POV chapters are fascinating, and the Maelstrom-native life ends up impacting the story in ways that are sometimes hilarious, sometimes quite alarming.
Characters get plenty of development and then die with little fanfare. I don't know how George R. R. Martin ever got his reputation for killing off characters. Trust me, you do NOT want to be a character in a Peter Watts novel.

So, let's recap. The protagonist is an insane woman spreading carnage and destruction throughout western North America as she tramps off on a perverse quest that has no rational basis, who does not care that her actions cause numerous innocent deaths. The antagonist is the person who is in charge of saving the world. And the Internet is where bizarre inhuman monsters live.

This novel is highly unpleasant. I also found it compulsively readable. I've already got the third volume of the trilogy on my smartphone, ready to read.
Posted by Brendan at 1:14 PM