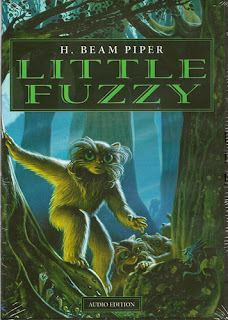 On the Earthlike planet of Zarathustra, currently in the early stages of being colonized and exploited by human beings, crusty old prospector Jack Halloway befriends a little woodland creature who decides to move into his remote cabin. The creature, who Halloway names Little Fuzzy, likes the food and safety of Halloway's residence so much that soon he brings his whole family unit to live there as well.

Jack Halloway and his scientifically-minded pals are intrigued by the Fuzzies' tool use and problem solving skills, and declare that they believe the Fuzzies to be an indigenous sentient race.

Enter the Chartered Zarathustra Company, which owns the entire planet and supervises all economic activity conducted there. It seems that humans have colonized planets with Stone Age natives before, and while there is no Star Trek-style Prime Directive in this universe, there do exist laws meant to protect the interests of technologically-challenged aborigines. If the Fuzzies are sentient, the planet will become a protected area and the Company will lose their exclusive rights.

Soon an exceptionally stupid Company bureaucrat kills a Fuzzy, Jack Halloway wants to see him tried for murder, and the court case which will determine the future of Zarathustra has begun.

Little Fuzzy is considered something of a classic among literary science fiction aficionados. It raises the issue of how one defines a sentient being, and what distinguishes a genuine Stone Age culture from merely a bunch of super-smart animals. (At times, the speculation on intelligence and sentience reminded me of the last novel I read, Peter Watts' Blindsight, though the two books couldn't possibly be further apart stylistically.)

The novel is engaging, and frequently amusing, and has a fast-paced plot. Apart from the one unavoidable bit of bloody violence, the book lightheartedly bounces along. For all of Jack Halloway's worry about the Fuzzies, the book doesn't have a whole lot of dramatic tension, and looking back afterwards, it's really not clear that the bad guys' efforts to have the Fuzzies declared nonsapient ever had a chance of succeeding.

I found the ending dissatisfying. I wonder if the book was showing its age. I get the feeling that in 1962, paternalistic attitudes towards non-Western, traditional cultures were still fairly acceptable, even in circles that considered themselves broad-minded.

Fuzzies are cute. Everybody in the book perceives them as adorable little things, and it doesn't help the case to have them declared legally sentient if people don't take them seriously due to their severe case of cuteness.

But I had a strong sense that even the most sympathetic characters still didn't take the Fuzzies seriously at the end of the book. In the final pages, the newly-appointed Commissioner of Native Affairs -- Jack Halloway, of course -- complains to a friend, 'Everybody wants Fuzzies; why, even Judge Pendarvis approached me about getting a pair for his wife. There'll be gangs hunting them to sell, using stun-bombs and sleepgas and everything. I'm going to have to set up an adoption bureau; Ruth will be in charge of that...'

So, if I'm understanding this correctly: Human colonists on Zarathustra think the darling little Fuzzies are adorable and want to keep them as pets, and Jack Halloway is going to let people do this legitimately, so as to prevent an illicit pet trade that would hurt the Fuzzies. His intentions are very noble and all, but does this seem right, given that the point of the whole book is 'Fuzzies are people'?

Even in the best-case scenario -- poor orphaned Fuzzy has no one to care for them, gets legally adopted by kind Human couple -- we're still displacing these people from their native culture.

A culture, I might add, that we know literally nothing about. By the end of this book, there still hasn't been a single meaningful Human-Fuzzy conversation beyond pantomime.

We know they're smart, conscious beings. We know shockingly little apart from that. And we're seriously talking about putting them in human homes to be raised by human beings?!

Piper wrote two sequels to Little Fuzzy, in which I can hope he dealt with some of these issues. (Even if he did, my view is that a novel ought to be able to stand on its own merits.) What I'm interested in reading, even more than the Fuzzy sequels written by Piper and others, is John Scalzi's 2011 reboot Fuzzy Nation, in which he retold Piper's story in the way he saw fit. Scalzi's take on the story will undoubtedly be entertaining and might help clarify my own thoughts on Fuzzyology.
Posted by Brendan at 2:00 PM