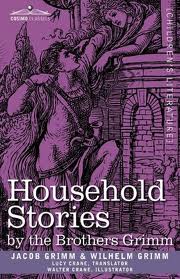 I'm taking the course Fantasy and Science Fiction: The Human Mind, Our Modern World on Coursera, taught by University of Michigan professor Eric Rabkin. The first assigned reading is the Lucy Crane translation of the classic stories collected by the Brothers Grimm.

These stories, written in a Victorian-era translation that predates Disney and all other aspects of twentieth-century popular culture, are essential cultural literacy for anyone curious about the origins of modern fantastical literature.

Most of these stories are very weirdly off-putting because they don't quite follow the structural rules that underlie most modern fiction. These structural rules are so fundamental that I didn't even really appreciate that they existed until a few years back when I read Tales Before Tolkien, a collection of fantasy fiction which inspired J. R. R. Tolkien. Most of the stories contained therein were written in the 19th century, but many were based on far older material that predated the codification of what we think of as modern fiction, so they retained pacing and plot structures that seemed exceedingly odd to my brain.

This is also evident in Household Stories, which tells me that Lucy Crane was probably very faithful to the very old source material (otherwise the stories would likely have struck me as more modern). Possibly the strangest story is 'Mr. Korbes', in which a cock and a hen go to pay a visit to Mr. Korbes. Along the way they are joined by a variety of animals and sentient versions of inanimate objects. When the motley bunch reach Mr. Korbes' house, they beat him to death. No reason is given.

In another story, 'The Dog and the Sparrow', a dog and a sparrow are friends until the dog is run over and killed by a man driving a cart. The sparrow then takes revenge, methodically destroying first the man's livelihood, then his house, then taking his life. The latter two-thirds of the story are nothing but the sparrow's cold-blooded violence described in gruesome detail.

Some assorted other thoughts:


Overall,  I enjoyed the collection. These are stories that survived as folklore for centuries before being collected for posterity by the Grimms. They are very different creatures than modern fiction, but they represent a literary tradition that's been folded into modern fantastical literature.
Posted by Brendan at 8:24 PM