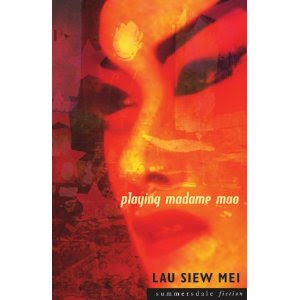 Chiang Ching was Chairman Mao's fourth and final wife. She made her name early in life as an actress. She became politically powerful during the late 1960s, becoming one of the instigators of the Cultural Revolution, and as Mao became old and senile Chiang Ching's power grew. After Mao died, Chiang Ching and her followers were forced out of the government. She was thrown into prison, and eventually committed suicide in 1991. (The novel does not spell her name using Pinyin, and I have followed its lead.)
Chiang Ching is a Singaporean actress, the heroine of Lau Siew Mei's Playing Madame Mao. Not only does she portray the Chinese leader on the stage, but as the hallucinogenic, phantasmagoric novel progresses, her life increasingly becomes conflated with her character's. Similarly, 1980s Singapore becomes identified with 1970s China. Her husband falls into political trouble for his writings, and she may have contributed to his troubles through her own activities (if we can trust the literal truth of certain passages).
The Singapore of Lau Siew Mei's Chiang Ching is ruled by a repressive government, whose enforcers are known as Red Guards, and which is led by a tyrant known only as the Chairman. (For those not familiar with Singaporean nomenclature, as far as I can tell the phrase 'Red Guards' is not normally used in reference to that country's police, and Lee Kuan Yew's title is never rendered as 'Chairman'.)
Adding to Chiang Ching's (the Singaporean actress, not the Chinese leader, not that the distinction remains so sharp within the novel) subjective confusion, the rules of reality are broached, as Chiang Ching dallies with the Emperor of the universe that lies beyond the mirrors, whose denizens are increasingly infiltrating real-life Singapore.
I felt as if the novel was operating on two levels simultaneously, one grounded in literal reality and one flying high in the realms of fantasy. And there's nothing wrong with that. But while I can appreciate the satirical intent behind conflating Lee Kuan Yew's Singapore and Mao's China, the fantastical elements left me bemused and unsure how to interpret what was supposed to be happening.
The novel ends by offering us a way to rationalize all of the preceding flights of fancy. Whether you accept that explanation of what has gone before is, of course, up to you.
Posted by Brendan at 11:49 AM