The Angel of Darkness 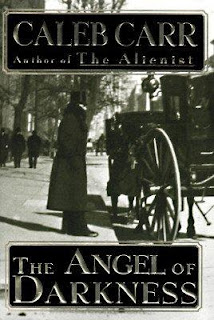 I first encountered author Caleb Carr's work through his best-known novel, The Alienist. A police procedural, The Alienist centers on a group of modern-minded sleuths, from both inside and outside the formal police department, who combine their skills and talents to solve a series of grisly murders in 1896 New York City. The book is thickly populated with actual historical figures (Theodore Roosevelt is practically a first-tier major character) and lovingly described locations.

More than that, the book struck me as an ingenious piece of work: it was essentially a technothriller that happened to be set a century in the past. The core group of investigators are at the forefront of crime-fighting technology, and are ready and willing to try out cutting-edge methods.

At one point they attempt to employ the new science of 'fingerprinting', the idea that each person's fingerprints are unique, and that a person's presence at a scene could be established by the prints he had left behind. And at another point, they attempt a different unproven science: they remove a murder victim's eyes and process them back in the lab, in the hope that the last images the victim saw before his death can be extracted from the eyeballs like pictures can be developed from film in a camera.

Fingerprinting and eyeball-image-developing are presented as similarly unproven, barely tested technologies, and our heroes have no way of knowing ahead of time which will yield fruitful results and which is a dead end. I liked that. It made The Alienist feel like science fiction, even though the narrative stayed firmly grounded in the 1890s. It made me wonder if Carr had ever written a novel that was actually science fiction.

I'm not going to name names. I'm not going to go into any detail about my next Carr-ian reading experience. But let's all just agree to agree that Caleb Carr has never written a book in the science fiction genre. And, if any of you happen to be in a bookstore or library and you think you see a science fiction novel by Caleb Carr, just leave it on the shelf and walk away. Trust me on this. You really don't want to investigate any further.

It's too bad Caleb Carr never wrote any novels that were explicitly science fiction. It's too bad they never made any sequels to The Matrix.

My confidence in Carr badly shaken by the reading experience I will not discuss, I bought The Angel of Darkness a while later. It is a sequel, reuniting most of the main characters of The Alienist and presenting an adventure that unfolds along similar lines. A baby is kidnapped from the wife of a Spanish diplomat in New York City, in the tense period that preceded the Spanish-American War, and the investigation spearheaded by chief protagonist Dr. Laszlo Kreizler turns up a gruesome trail of dead children connected to the suspected baby-snatcher.

The narrator from the first book (and Watson figure to Dr. Kreizler's Holmes), New York Times journalist John Moore, is demoted to comic relief status. The new narrator is Stevie, the rescued street urchin who was a supporting character in the first book.

The Angel of Darkness is not a bad book. It's a fairly exciting page-turner (it had better be, at over 600 pages) and is intelligently written. But I didn't enjoy it anywhere near as much as The Alienist. And I think a lot of the reason why has to do with my attitude towards sequels.

I like sequels that break new ground. Or, I like sequels that stand on their own just as much as the original story. I do not care for 'The whole gang is back to go on another adventure!' stories. And unfortunately, The Angel of Darkness is very much that kind of book.

Part of it is the perhaps unavoidable fact that, with The Alienist, I felt like old tropes had been assembled into a new and exciting form. But with The Angel of Darkness, the form was a familiar one. Also, in The Alienist, it felt like anything could happen. Obviously Teddy Roosevelt was going to survive, as were the characters who appeared in the 1919 frame story. But the other fictional named characters really seemed in mortal danger, and there was one death that genuinely shocked and surprised me. Contrast with The Angel of Darkness. I'm going to spoil it for you: even though The Angel of Darkness is a fairly bloody book, every 'good guy' who returns from the first book will survive the second. But that's not even much of a spoiler, since I never felt like any of the 'old friends' were ever in any danger.

Finally, it would be interesting to discuss the portrayal of certain non-white characters in the novel. I'm not certain if one character in particular really crossed the line into offensive territory, but I'm going to go with 'probably yes'.
Posted by Brendan at 3:19 PM