Here's a tidbit that came out of the Occupy protests a while ago: in Chicago, some Board of Trade member decided to treat the protestors to a few more pieces of litter:

Someone at the Chicago Board of Trade issued another message to the Occupy Chicago protesters by blanketing them with these McDonald's job applications. The protesters are understandably offended by both the message and by the hundreds of pieces of new litter around them.

Now, let's try to get inside that person's head. What did they think they were accomplishing?
a) The protestors, upon receiving applications to work at McDonald's, would realize that there actually were ways for them to make money and get ahead in life. They would then get up off their asses and go work at McDonald's and make money. Value: Something.
Or:
b) The application-dumper found it enjoyable, and perhaps a bit reassuring, to think that the Occupy protestors were a bunch of slackers who just didn't have the gumption to get up off their lazy asses and make something of themselves. So this person dumped McDonald's job applications on the Occupiers' heads, hoping that this would be slightly wittier than just standing outside and shouting, 'Get a job, you dirty hippies!' As a result, the application-dumper felt some self-satisfaction and the Occupiers felt even more alienated from the people they were protesting. Value: Nothing. Less than nothing, in fact.
Are there other ways to interpret this action? If you think I'm misunderstanding something, go ahead and post a comment. Me, I think option b) sounds slightly more believable.
I don't live in the United States, and I don't regularly watch American TV news. I'm watching this all from Taiwan. Therefore, it is theoretically possible that I am the victim of a massive misinformation campaign regarding the content of what the American mass media is delivering to people's homes. If so, I apologize for what I'm about to say.
But from what I gather, the journalists of the mass media have been pretending from the start that they don't understand what the Occupy protestors want, and are generally trying to paint them as aimless, dirty hippie types. 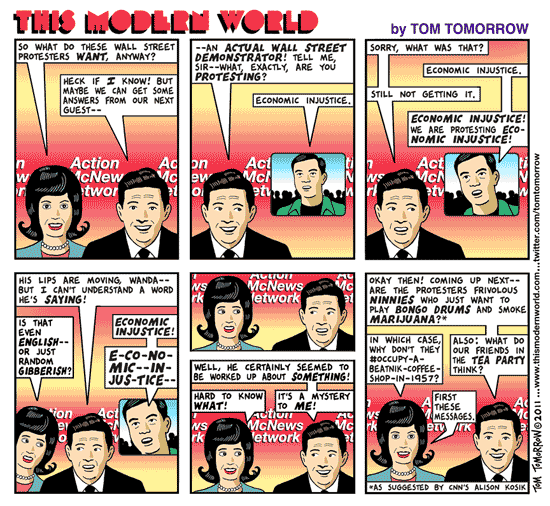 I've gone through several stages of thinking about this.
At first, I thought, 'HOLY CRAP! The paranoid conspiracy theorists were right all along about the Mainstream Media being in the pocket of Big Business! I was wrong to mock them!'
Then, I thought, 'Wow. The corporate media must be really scared of Occupy Wall Street if they're not going to report on them fairly. In their minds, even the great prudent cautious silent majority of American society will go out on the streets and start protesting if they get news that is even remotely accurate. America must be more screwed than I thought.'
Then my thoughts settled into, 'No, it's not as bad as all that. It's just that TV news wants to create a family and community atmosphere among its viewers, and what brings people together as a community more than thinking that next door lives a bunch of crazies who may seem threatening at first, but are really just a bit silly and harmless and let's all mock them together?'
That's what I think now. The Occupy Wall Street group are that bunch of silly people that TV news wants Americans to good-naturedly mock, the better to come together to feel like a large nation-wide community who gathers 'round the TV in the evenings to watch what's happening elsewhere in the world.
I don't think this is as conspiracy-theoryish as it sounds, because I don't think it's the result of conscious decision-making. I think it's the aggregate intuition of thousands of people in the media, about what they think viewers want to see. It's unconscious.
But it violates one of my rules for dealing with people who are different from you: It's wrong to misunderstand them in order to make yourself and others feel better.
There are fine, nebulous lines that separate:
a) misunderstanding someone deliberately and consciously,
b) misunderstanding someone unconsciously, because you've primed yourself to see what you want to see and hear what you want to hear, and
c) misunderstanding someone totally innocently.
A) and b) are wrong. It's wrong to call someone at an Occupy protest a lazy slacker who doesn't want to work for a living when you've got no evidence that is the case for that particular person. It's wrong because while it may make you feel satisfied in the short term, it makes the other person hate you and feel alienated. And what's more, that's very bad strategy in the long term. You're not going to get what you want by mindlessly insulting other people.
It's wrong when people do it to the Occupy Wall Street crowd.
And in all fairness, it was wrong to do it to Tea Partiers too, with 'racist ignorant moron' replacing 'unshowered hippie slacker'.
Way back in September of 2009, back when Tea Partiers were the fresh new thing in the USA, I was astonished when the Taipei Times ran a story on a Tea Party protest back in the States, which quoted possibly the least intelligent person attending that protest.

"[US President Barack Obama] is a traitor. He's either a Marxist or a Communist ... I think Saudi Arabia is behind him."

And then the Taipei Times -- read by plenty of non-Americans, mind you -- made that quote their Quote of the Day. At the time, my astonishment took the form of, how does that moron deserve to be featured prominently in a newspaper across the world in Taiwan?!
But now, in light of what's been thrown into sharp focus by media coverage of Occupy protests, I'm angry about that quote for a different reason.
My point is not to compare the Tea Party and Occupy Wall Street, or imply if one is legitimate the other must be too, or draw any kind of equivalency between them. Except for this:
They're both composed of human beings with human psychology.
When news organizations took a singularly moronic comment at a Tea Party rally and made it seem like it represented the beliefs and motivations of everyone there, it accomplished two things. It made people think, 'Hah! I thought the Tea Partiers were people we had to take seriously, but really they're a bunch of morons.'
And it also made Tea Partiers look at the media with even more suspicion. It gave them a grievance that they could nurse for a good long time. It made them feel condescended to.
In the end, no one wins.
Posted by Brendan at 11:17 AM

I don't think you are getting the full picture. I've seen interviews with the protesters in various cities. To me they come across as smart, thinking people who are so frustrated with the current economic situation they just had to do something. That some of the media showed them this way makes me think that not all of the media is as unfair as you say.

Good. As I said, from my perch outside of the United States, domestic mainstream media coverage looked pretty depressingly misleading (as it did when I was briefly in the States in October). Your comment is a pretty positive sign, I think.

* - To "get a job", you must have a perfect work history with no gaps, but no more than x number of jobs in the past x years, you must submit to a background check, a drug test, a personality test, a credit check which must be clear, you must be willing to accept a wage that can not possibly pay expenses and pay back any loans you have taken out at the same time, you must have at least five years of experience, a college degree, and these certifications, but don't worry about putting all of that to use because it is entry level, oh, and you MUST be currently employed too.