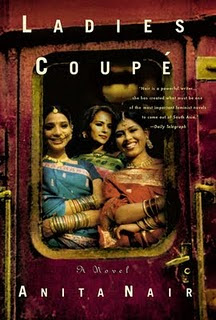 Akhila is a middle-aged government bureaucrat in Bangalore. She's never married, as she's worked to support her family ever since her father's untimely death. Akhila is not only resigned to spinsterhood, she can't even claim the independence of unmarried life because she lives with her sister Padma and her family. Padma simply cannot bear to see her living alone, even as she tells all her friends and neighbors how irritating she is. Fed up with the situation, Akhila goes on a long train ride to think her life over. In the all-ladies railway compartment (the "ladies coupe"), she and five other women share their stories and sort out whether independent life as a woman is possible in modern Indian society.

The final installment in my springtime trilogy of Indian novels. (Although I'm midway through an Indian nonfiction book, and I may well pick up more Indian fiction later this year.) All three of the novels in my self-chosen "trilogy" have been by women, but Ladies Coupe by Anita Nair is the first one that can be called actively feminist. Its six female protagonists provide six varied viewpoints from which to view the Indian experience:

Chief protagonist Akhila, trying to work out how to be her own person after a lifetime being defined by others;

Older woman Janaki, still happily married after decades, but wondering if she's become too dependent on her husband;

Teenager Sheela, affected in complicated ways by the recent death of her grandmother;

Chemistry teacher Margaret, gradually coming to realize she despises her husband, and subsequently molding him into a man she can control;

Wealthy wife Prabha Devi, who re-invents herself in marriage not once but twice;

And finally, fed up with hearing the stories of the previous five women, who despite a sexist society still enjoyed the advantages of middle-class living, domestic helper Marikolanthu tells of her own life devoid of privilege. Mari's treatment at the hands of her own family after being raped is an unmitigated horror for any reader with Western sensibilities, and is worth reading for anyone who genuinely thinks we'd be better off returning to traditional values and family structures. You might say that her family chose to treat her that way, but they did so within cultural expectations that justified and required it in their eyes.
Posted by Brendan at 9:11 AM