The Great Transformation by Karen Armstrong 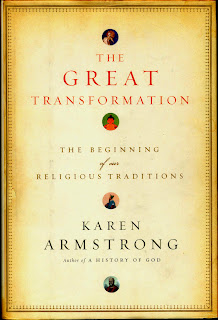 I first heard of the “Axial Age”, a term invented by German philosopher Karl Jaspers, in an episode of Dan Carlin’s Hardcore History podcast. I was unconvinced. To say that there was an amazingly creative age of philosophical and religious thought is all well and good, but the Axial Age lasted six hundred years! (From 800 to 200 BC.) Six hundred years ago Europe had barely launched the Renaissance and China had overthrown the Mongols within living memory. Six hundred years ago India and southeast Asia were still proudly independent of Europe, because Westerners hadn’t yet figured out they could sail around southern Africa. Six hundred years is a really long time period to attach a label to.

It makes more sense when you think of what an enormous expanse of time our notion of “ancient history” entails. We think of the Middle Ages starting roughly 1,500 years ago; written history in parts of the world goes back 3,500 years before that.

How old is Egypt? Ancient Egyptian history gets divided into the Old, Middle and New Kingdoms. When the Old Testament talks about Egypt, it’s talking about the New Kingdom. Even in Genesis.

So before the six-hundred-year Axial Age began, we had at least two thousand years of written history in Sumeria and Egypt; less in China. Where are the pre-Axial philosophers? Well, we can point to religious figures such as Zoroaster and Abraham, but a smattering of prophets seems a bit sparse for a two-thousand-year span of history.

You see some people claiming human minds were quantitatively different before 1000 BC (see bicameral mind), although I think it more likely has to do with the fact that writing was far less widespread back then. Keeping track of payments, maintaining lists of kings, recording religious rites, and fortunetelling (think Chinese oracle bones) -- was writing used for anything else, really, three thousand years ago?

And then, starting around 800 BC in various places around the world, writing comes into its own as a means of transmitting information, creating a number of positive feedback loops as individuals develop ever more sophisticated philosophies. And Karen Armstrong’s book The Great Transformation: The Beginning of Our Religious Traditions documents this.

Armstrong puts in parallel the religious and intellectual traditions, from 800 BC to 200 BC, of four areas: China, India, Israel, and Greece. Her book can, of course, be read as a guide to ancient philosophy. Armstrong would rather you read her book as containing a coherent thesis on the Axial Age philosophers and what they can teach us.

Armstrong is very pro-religion, anti-fundamentalism. She admires the Axial thinkers for not focusing on dogma. As she writes in the introduction:

If the Buddha or Confucius had been asked whether he believed in God, he probably would have winced slightly and explained -- with great courtesy -- that this was not an appropriate question. If anybody had asked Amos or Ezekiel if he was a “monotheist,” who believed in only one God, he would have been equally perplexed.

And toward the end of the book, she reminds us repeatedly that the Golden Rule, that you should not do to other people what you wouldn’t want others to do to you, was the central tenet of so many Axial philosophies. The last section is a warning against the religious fundamentalism and lack of empathy she sees in modern society. Now, she writes, we should remember what the Axial sages taught.

Karen Armstrong gives her TED Prize speech. And in another TED talk, here she talks specifically about the Golden Rule.
Posted by Brendan at 9:44 PM