The Dust Has Cleared 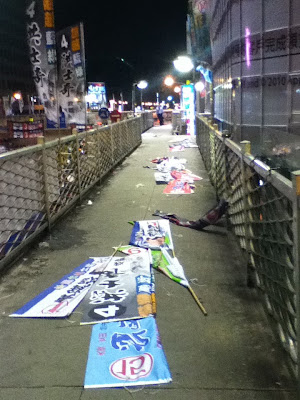 So what actually happened in those Taiwan municipal elections?
BEFORE THE ELECTION, I believed Su Tseng-chang had a real shot of knocking off Taipei mayor Hau Lung-bin, and in any event the race would be close.
WRONG. Hau demolished Su by 12 percentage points. There are rumors that Su's unexpectedly large loss has ended any realistic shot he may have at winning the DPP presidential nomination in 2012, though I think it's a bit too early to tell.
BEFORE THE ELECTION, I thought the KMT would achieve a better performance in Sinbei than in Taipei. I thought Tsai Ing-wen could only hope to win election if she rode a nationwide DPP wave.
MOSTLY WRONG. Tsai lost, but she made it close, winning a greater percentage of the vote than Su.
BEFORE THE ELECTION, I thought the Taichung, Tainan, and Kaohsiung mayoral races would not even be close, with the KMT winning easily in Taichung and the DPP taking the other two.
PARTLY WRONG. Tainan and Kaohsiung voted pretty much the way everyone expected them to, but Taichung mayor Jason Hu got a real scare on Election Day when his opponent, Su Jia-chyuan, came very close to unseating him. Now Su's getting a lot of praise in the DPP and people are talking about him as a real 2012 presidential contender.
The day before the election, people told me they expected something surprising to happen on Election Eve. Sure enough, that evening a prominent KMT politician (not a candidate for anything, but a famous face), Sean Lien, was shot and wounded in an assassination attempt in Yonghe, not far as the crow flies from our apartment. Lots of famous and non-famous people have theorized that the KMT got a good deal of sympathy vote as a result, which may well have denied Tsai Ing-wen and Su Jia-chyuan victories in their respective cities.
As a result, of course, we're already hearing the conspiracy theories.
The sad thing is, unsuccessful attempts to assassinate politicians the day before elections, causing people to argue over whether it skewed the results, is something of a tradition in Taiwan. Hopefully it won't happen in 2012.
Posted by Brendan at 2:55 PM