So I’m at a loss about what we’re supposed to do in the world according to Jon Stewart. Hey, all you people working for gay and lesbian equality, all you women asking for equal pay, all you workers trying to unionize, all you peaceniks trying to end the war in Afghanistan, all you nurses and doctors and clinic workers trying to maintain reproductive freedom and keep women alive, all you teachers trying to teach science and history without censorship, all you citizens trying to build a rational health care policy, all you scientists and doctors who want our country to progress in medical research, all you damned secularists who want to keep religion out of our schools and government, hey, hey, HEY, you! Tone it down. Quit making such a fuss. You’re too loud. Shush. You’re as crazy as the teabaggers if you think your principles are worth fighting for.

That's Pharyngula on the message of the Stewart/Colbert rally. Zunguzungu has similar thoughts here and here.
I agree ninety percent, but I think I half-disagree as well. That implies a total of a hundred and forty percent. I'm weird like that.

What am I trying to say? Well, let's look at the Tea Party brand. I don't agree with what the Tea Party stands for, but I don't think it's necessarily racist at its heart either. But it's impossible to deny a lot of loud people in the movement say a lot of really, truly racist things.

In the past I've wondered why the most prominent promoters of the Tea Party brand haven't loudly spoken out against this kind of moronic tomfoolery. Wouldn't that be leadership? But then (this is going to sound a little conspiracy theory-esque) I realized to just what extent the Tea Party brand was promoting the idea among Tea Partiers that they're looked down upon by elitist snobs. Tea Partiers are condescended to. Not understood. Not listened to. Oppressed. So it makes sense to get liberals to believe that Tea Partiers = Bigots and Morons. The better to encourage Tea Partiers to go into defensive formation and support Tea Party candidates all the harder.

If I had to summarize that on a bumper sticker or protest sign: 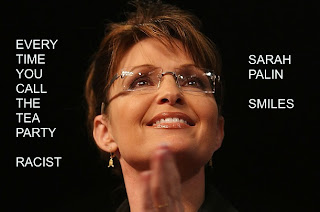 If you think your political opponents condescend to you, you'll enter a defensive formation. Defensive formations cause echo chambers. Echo chambers cause whacked-out beliefs. I wonder if climate change denialism would be so popular in the United States if not for the fact that it's big dumb liberals who are telling denialists climate change is something they need to be concerned about. Some people believe what they believe chiefly to differentiate themselves from segments of the population, real or imagined, that they hate and don't want to identify with.

I'm not an idealist. I don't want us all to join hands and sing Kumbaya. I like to think I'm pragmatic. And getting people to calm the hell down and talk in civil voices to each other is a big part of that pragmatism.

I don't think that was the message of the rally, though I can see why it was construed that way. I think the message was that it's OK to stand up for what you believe in, make a fuss, work hard, fight for your principles, but you have to do so without calling the other side names, taking potshots or shouting mindlessly.

All the doctors, nurses, women's rights advocates, racial tolerance advocates, peaceniks, charity workers, teachers etc. who fight for those beliefs, if they are mature people, already know this.

(Which they usually are, though not always - it's amazing how often someone with a strong moral compass and noble intentions is, on a personal level, kind of irritating, competitive, arrogant, emotionally under-developed and spazzy).

It's was a rally to speak out against the potshots and angry rhetoric, the "sound and fury, signifying nothing", and hey, if most of that sound and fury comes from Republicans and Tea Partiers...not our fault. But also to tell those people on the Jon Stewart side of things that you can't stoop to that level, you certainly can't act that way even if your beliefs are more liberal, and you can't let yourself get caught up in it. Better to keep fighting with rational, if passionate, discourse.

I think even Jon Stewart understands that passion has a place in civil discourse and it's OK to get a little heated. It's OK to fight hard. It's just not OK to abandon the idea of idea/critique/counterpoint/defense in favor of "U R A STUPID HEAD & NOT A REAL AMRIKAN!!1!!1"